Rain or shine, Pachanga Fest played out all ‘corazon’ 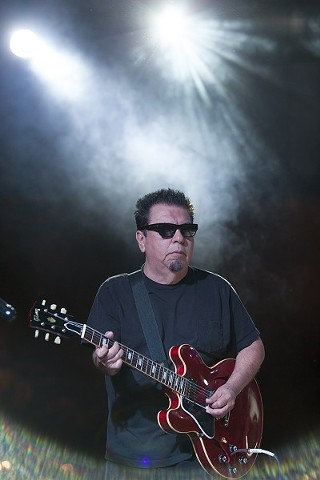 Riding my bike through East Austin towards Pachanga Fest on Friday, I spotted a teen in her quinceanera dress as soundtracked by Tejano music blaring from cars. The hood south of Cesar Chavez maintains a distinctly Latin feel, and Fiesta Gardens remains one of Austin’s most enchanting destinations. It all came alive Pachanga weekend.

Rolling my way into the park, I found an eightpiece called Esta Vato mixing rock, rap, and cumbia for about 100 people under a massive metal pavilion. Moments later, when the clouds broke into hard rain, the locals found themselves performing to scores and scores more, everyone swarming under cover to keep clear of the wind and water.

“I feel like I’m at a Mexican Chippendales review,” I admitted to a colleague who was also a shade lighter than everyone else at Friday’s show.

“The rules we know don’t apply here,” he replied.

That sentiment held as headliners Intocable took the stage looking more like caballeros than a pop music act. I was wrong. The Norteño superstars – heroes to the cowboy-hat-and-pointy-Mexican-shoes crowd – took the stage to cheers from one of the weekend’s largest audiences and hit them right in the corazon with smooth Mexican power ballads.

Saturday afternoon, I caught the Anthropos Musician Collective, a 25-piece collective comprised of East Austin teenagers playing impressive covers of the Buena Vista Social Club and Grupo Fantasma with rounds of improvised solos. They’re the product of local non-profit Anthropos, a group that provides professional music mentoring for students from low-income families. Considering how talented these kids already are, I expect to see some of them playing at Pachanga with their own bands in a few years.

On the Patio stage overlooking Lady Bird Lake, I caught a spirited performance from Oakland hip-hop crew Bang Data before sojourning across the park to see Flaco Jiménez squeeze some history out of the accordion. With the help of sideman Rabbit Garza, the Sancho Panza to Jiménez’s Don Quixote, the 74-year-old Texas Tornado evoked the soul of his all-star band by performing “Who Were You Thinking Of” and prompting a sing-a-long for “(Hey Baby) Que Paso.”

After 20-year-old L.A. quartet Sweet & Tender Hooligans wowed the Pavilion crowd with uncanny Smiths and Morrissey covers – both in sound and look – local newcomers Como Las Movies got a tent full of beautiful women dancing to their accordion dub. Back at the Hierba stage, Pachanga vets Grupo Fantasma sampled material off their upcoming Steve Berlin-produced album.

Surprise of surprises, at the end of their set, guitarist Beto Martinez revealed that, after 13 years of service, founding member Adrian Quesada would be “detaching himself from the Grupo Fantasma mothership.” From Austin’s Empanada Parlour to the Grammys, it’s been an epic run.

At nightfall, Mexican accordion star Celso Piña strutted around the stage like a boss rooster and proved why Monterrey’s cumbia king comes branded as El Rebelde del Acordeón. His was a close second to the night’s best performance, which appropriately happened last via veteran Chicano rockers Los Lobos, who unloaded a three-guitar arsenal of blues rock (“Don’t Worry Baby”) and looked like they had a helluva good of time doing it (“Evangeline”).

“It’s nothing but a party,” announced guitarist Cesar Rosas as the wolf pack welcomed Dutch accordion phenom Dwayne Verheyden onstage to steal the show with some incredible squeezebox solos. Los Lobos’ guitarist (and accordionist) David Hidalgo was visibly delighted by Verheyden’s presence and wouldn’t let him leave the stage, keeping him on through Rick Trevino’s guest vocal on George Jones cover “He Stopped Loving Her Today” and the euphoric closing medley of “La Bamba” and “Good Lovin.’”

For all its geographic variances and diverse musical styles, Pachanga culminated in a universal language: loud rock & roll. 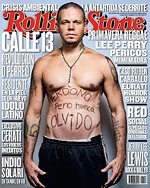