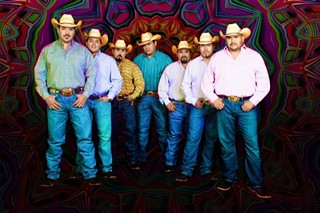 Our coverage of the Pachanga Latino Music Festival in this week’s paper centers around Saturday’s 21-act bill, but the six-year-old festival offers a veritable feast of ways in which you can get down with this weekend’s fiesta.

Tonight at 7pm, brothers Rocky and Oscar Reyna push Latin fusion in the form of Este Vato, a local eightpiece encouraging mas bailando since 2008. The party continues at 8pm when 3ballMTY, a three-man tribal guarachero weave out of Monterrey, Mexico, sets up behind its boards.

Friday’s send-off comes at 9:20pm via Zapata, Mexico, headliners and caballeros Intocable, who bring stadium-ready Norteño pop to what should be a lively crowd at Fiesta Gardens.

Acts like the aforementioned don’t typically show up on local lineup cards – in fact, most on the Pachanga docket qualifies as new blood – but festival organizer Rich Garza told the Chronicle yesterday that discovery plays a huge role in the booking.

“Come with an open mind,” he says. “We’re programming for people who know a lot about music and [people] who know nothing about it. It’s all very accessible on purpose, and it’s as much about the sum of the parts and enjoying great music in a great park as it is the awesome bands.”

Speaking of that “great park,” Garza considers Pachanga’s East Austin destination one of the chief headliners of the fest.

“The vibe on the water is just so great,” he reiterates. “The patio area’s beautiful. It just all sort of works and we want the park to very much be a star. In a lot of ways, it’s the secret weapon.”

In addition to such an evergreen secret weapon, there’s more Pachanga action by way of after-shows. Tonight, look to pair of featured sets at the Scoot Inn, Master Blaster Sound System and Como Las Movies, then full-throttle 2011 Fest veteran Mexicans With Guns and the Sun Machine on Saturday. More sets both nights at Hotel Vegas and the Volstead Lounge include Bang Data, Este Vato, Los Master Plus, Gracie Chavez, and local crate digger DJ Orion.

Also worth noting: Carla Morrison, the 26-year-old Los Angeles pop-rockera who captivated crowds during SXSW 2011 at Flamingo Cantina, was originally slated to perform at Pachanga but had to push back to May 26, when she’ll headline the Belmont.

“It worked out better for all involved,” explains Garza. “We would’ve loved to have [had] her and she would have loved to be here, but this was an option that came up that worked for everyone. [A Pachanga show] would have been a one-off, and she’s doing a run of U.S. dates later in the month.”