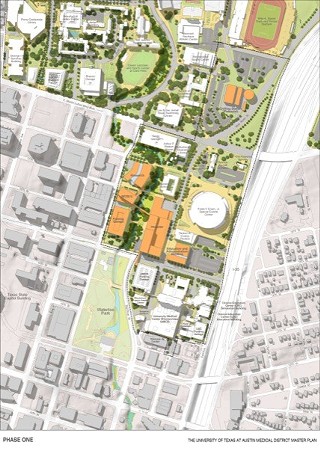 Development of UT's Dell School of Medicine could mean curtains for the Frank Erwin Center. (by University of Texas)

Wednesday morning, KUT News reported the proposed $334.5 million development of the Dell School of Medicine on the southeastern end of UT’s campus. The proposal outlined plans for a hospital, research facility, and parking lot, as well as, in all likelihood, the eventual demolition of the Frank Erwin Center.

Speaking outside the UT Board of Regents’ Health Affairs Committee meeting downtown in Ashbel Smith Hall this afternoon, University spokesman Robert Cullick told the Chronicle that the massive arena and concert facility could meet its fate in the second phase of the three-tier installation plan, a revelation that brings the shelf life of the 17,000-person venue to somewhere between 10 and 15 years.

Of course, that’s dependent on Thursday’s vote for the proposal by the full Board of Regents. Sentiment this afternoon suggested the vote was little more than a formality of parliamentary procedure.

Considered by many to be a big, beige eyesore in a sea of beautiful burnt orange, the Erwin Center actually finds itself in the middle of its most successful run in years. If you disregard the Longhorns basketball squad’s all-too-mediocre 16-18 record last season, the future looks brighter.

Since South by Southwest, the venue’s hosted Eric Clapton, Bon Jovi, Rush, and Rodriguez, with such world renowned showstoppers as Paul McCartney, Black Sabbath, Taylor Swift, and Bruno Mars on the docket this summer.

Its appeal stems from a 17,000-person cap – the largest in Austin – and centralized location, which provides relatively easy access from points north, east, south, and west, and even comes complete with a bus stop right outside the gate. CapMetro 10-South local bus, we see you.

Nevertheless, as UT architecture professor Larry Speck told the Regents and Cullick reiterated to the Chronicle, the venue would require $40 million in improvement costs to fix problems currently facing the Erwin Center’s interior, including water damage.

Currick also pointed out the venue’s possession of one solitary loading dock, an apparent problem for everyone who stops in, except potentially, Sir Paul McCartney.

All discourse concerning the subject remains strictly academic until the Board of Regents meets to vote on the proposal tomorrow. Then, if it goes through, locals can start thinking about the arena that may replace Austin’s largest active venue, one constructed in 1977 and which has since hosted more than 25 million people.

Cullick said that those responsible for figuring out where the Longhorns will play next have not even begun considering their options.