For one thing, David Ziolkowski has played bass since he could pick one up and join his older brother, Magia Negra drummer Victor Ziolkowski (Misspent Youth, the Fireants), in jamming with their father, Vic Gerard (Chaparral, Two Hoots & a Holler). For another, William Harries Graham and David Ziolkowski are friends and play the same circuit. Inspired by the former’s Proper Nang series at Maria’s Taco Xpress, the latter set out to organize his own shows. Tonight marks his seventh.

Lucky seven, you could say, since Magia Negra also features Lolita Carroll, whose father is Cali-Mex rocker Tito Larriva. Besides starring in and providing memorable soundtrack moments for Robert Rodriguez/Quentin Tarantino’s From Dusk Till Dawn, Larriva’s played with a series of SoCal bands that reaffirm the roots of Latin rock via punk and alternative rock: the Plugz, Cruzados, Tito & Taratula. Besides, Tito wanted to play in Austin with his daughter.

“I’d been trying to book a show at the Mohawk,” David Ziolkowski wrote when queried via email. “Coincidentally, my brother Victor was getting back from a tour with Tito’s daughter in Magia Negra and asked me to try to book the last show of their tour in Austin. I talked to the Mohawk and they gave me May 8.

“I wasn’t expecting Tito until Lola told him I booked the show, and he said he wanted in. So I of course said yes! The Hereticks are Magia Negra’s friends and they bring a really big crowd. The Mighty Land Shark is a really fun surf band, really nice guys. I’d been trying to play a show with them for a while!”

Since his days fronting the pre-teen local blues-pop trio Casino in the late Aughts, David Ziolkowski has absorbed the influences of his father and brother and put his own spin on Pangia’s hardcore surf. His expansion into booking and producing comes naturally, with endless opportunities ahead. 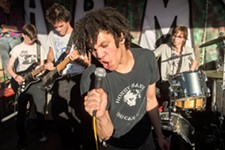