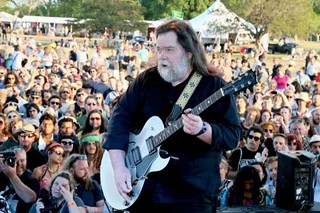 On the Reverberation mainstage, Austin Psych Fest’s final day drew to a close with a transgenerational trifecta of Texas-bred acts, each of which embodies a different aspect of the music that the event celebrates.

Roky Erickson, whose pioneering work as frontman of the 13th Floor Elevators made him a key force in the genre’s birth, and whose subsequent solo output expanded psychedelia’s exploratory impulses inward to document his tortured inner life, continued his unlikely resurgence with a halting but fitfully inspired set.

With a song selection that featured more Elevators material than he usually tackles onstage, plus sympathetic support from a backup combo that sunk its teeth into the punk snarl of his solo material while negotiating the feral tempo changes of the Elevators tunes, Erickson unfurled the still-transcendent howl that’s largely withstood the ravages of his lost years.

While some of the long-unperformed Elevators material got the better of him – “Levitation” became an unintentional mashup when he sang the lyrics to “Reverberation,” which was placed further down the set list – he was on firmer ground with the likes of “Roller Coaster,” “Fire Engine,” “Tried to Hide,” and a haunting “Splash One.” Erickson’s focus and attention span had apparently worn thin by the end of the set, resulting in distracted renditions of “Two Headed Dog” and “You’re Gonna Miss Me.”

But exactitude wasn’t the point. The fact that Roky Erickson’s performing at all is a minor miracle, and the authority and history that he brings to the table by merely showing up made this a compelling performance.

Sandwiched between two key acts from Lone Star lysergia’s frontier days, neo-psychedelicists and APF founders the Black Angels rose to the occasion with a swaggering set that demonstrated the showmanship that belies the band’s humble indie status. While their songs tend to be short on emotional and melodic engagement, they’re effective vehicles for the group’s well-oiled live execution. The local quintet’s fluent grooves and hypnotic drones felt particularly dynamic on the festival mainstage, particularly when the band was joined onstage by sitarist Rishi Dhir, whose own band Elephant Stone distinguished itself earlier in the day.

Billy Gibbons’ fabled Houston outfit the Moving Sidewalks closed out the evening with a set that, for better or worse, accurately reflected the foursome’s original evolution from scrappy, Elevators-worshipping garage combo to Hendrix-infatuated heavy rockers. For their first Texas gig in 44 years, the Sidewalks – with Gibbons and bassist Don Summers playing custom-made axes outfitted with digital screens that generated liquid-light-show patterns (see the photo gallery) – offered a selection of tunes from their original repertoire that suffered from an overeliance on plodding blooze-rock numbers that sapped the 70-minute set’s momentum.

The inspiration level picked up considerably when Black Angel Alex Maas joined them on electric jug for a run through the aforementioned Elevators’ classic “Reverberation,” followed by an energetic two-song encore of the Sidewalks’ 1967 local smash “99th Floor” and a distinctive Hendrixian recasting of the Beatles’ “I Want to Hold Your Hand.” 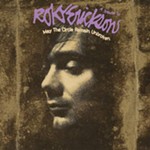 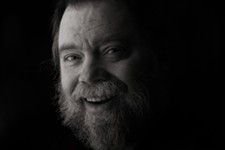 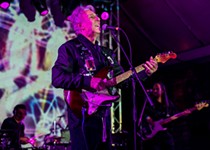 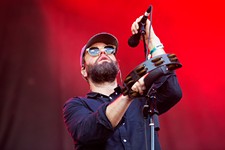