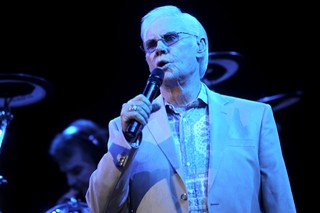 George Jones in a previously unpublished photo from his penultimate Austin performance at the Travis Country Expo Center on March 25, 2011, for an appearance at Rodeo Austin (by John Anderson)

I have no idea if it’s the same for anyone born in Texas after, say, 1990, but there’s generations of us who, no matter our class, creed, color, religious, political, and musical beliefs, or genital arrangement, were stopped dead in our tracks and wept uncontrollably at the news that George Jones, native of Saratoga, died this morning. I know I did.

There’s no comfort in knowing that Jones, 81, was aware enough, in recent times, of his age and mortality to have announced late last year he would undertake a farewell tour in 2013 – to be capped with an already sold-out show at Nashville’s Bridgestone Arena on November 22. The special guests that night were to include, according to the Guitar World magazine website, Alan Jackson, Garth Brooks, Charlie Daniels, Kenny Rogers, and the Oak Ridge Boys, among others.

Such a lineup testifies to a pair of Chronicle assessments of Jones’ most recent local appearances and that maybe it was time for his curtain call. Better testimony that perhaps Jones’ exceptional artistry hadn’t left him was the announcement of a final LP to have been entirely written by Dolly Parton, cruelly unsung for her songwriting prowess.

My mama raised me on George Jones. I don’t see how you could be a native son or daughter of Texas and claim otherwise. He’s woven tightly into our state’s DNA. This was the breadth of the man’s gifts and the talent shadow he cast across Texas music: even Flaco Jimenez’ manager was devastated when I called him with the news this morning to postpone my interview with the famed accordion player in order to write this.

And to hear a reissue of dubious origins, Rock It, the story could’ve been very different. Like many mid-Fifties Southerners of his generation, George Jones had his head sliced clean off by the rise of a savage, greasy, 21-year-old named Elvis Presley, and cut a number of excellent rockabilly sides of his own – including a raw take on “Heartbreak Hotel” that resembled how that classic would have sounded had its hit-maker attempted it at Sun Records.

As good as those “Thumper Jones” rockabilly sides were, good sense must have prevailed. We know how the story turned out, with George Jones universally hailed as Country Music’s Greatest Singer, hailed for his sheer artistry even by rock & roll royalty including Bob Dylan, Tom Waits, Keith Richards, and Elvis Costello. It seems more unlikely if you witnessed his technique in action. His former wife and most celebrated duet partner, Tammy Wynette, once chided him on network TV in the Nineties with, “Do you ever open your mouth when you sing?!”

He was also capable of absolute dreck, novelty garbage like “The Love Bug” and “I’m A People” that would make the most shameless showbiz hack cringe. Then you hear something like – well, forget the over-cited “He Stopped Loving Her Today,” a song so admittedly great that it single-handedly righted Jones’ then savagely off-balance career and even had an entire book written about it. Instead, cue up “A Good Year For The Roses,” from 1970.

Yes, producer Billy Sherrill was already draping Jones in countrypolitan strings and choirs, a move that choked dead many lesser country greats. But give George Jones a song this great – maybe the ultimate chronicle of the devastation left in the breakup of a marriage – and he cut right through the cheese. He’d find the heart of the lyric and just kill you with it. There’s no doubt of the pain of the song’s narrator once he’s done, and how hard it hurts all involved:

Go ahead, reach for the razor blade. I’m about ready to myself. That the man packed that much power in his best performances made me proud to boast all my life that I shared a September 12 birthday with George Jones. And as with Willie Nelson, Roky Erickson, Buddy Holly, Roy Orbison, or Bob Wills, he made you proud to come from the great state of Texas. He was that good.

Jones lived hard and fast and found himself frequently penniless despite his massive success, confessing that the likes of both Jennings and Johnny Cash had helped him financially at times. He sold dog food at his concerts and had succumbed on occasion to re-recording inferior versions of his classics to pay the bills. And yes, he once famously rode a lawn tractor to a bar to get drunk when his second wife Shirley Corley took away his car keys.

None of that mattered when the man (barely) opened his mouth and broke your heart into 17 pieces with one well-placed lyric. Words became psychological weapons in George Jones’ voice. No one was immune once the melodies began flowing.

“There’s a blue note in each song that I sing since you’ve been gone.”

George Jones sang that in his 1957 hit “Color of the Blues.” That should be etched on his tombstone. As he leaves this world, George Jones takes with him “White Lightning,” “The Race is On,” “She Thinks I Still Care,” “The Window Up Above,” “Walk Through This World with Me,” the aforementioned “A Good Year For the Roses” and “He Stopped Loving Her Today,” and way too many other great songs. He owned those songs.

He also owned the heart of every person who heard him sing. Now he’s gone. I don’t know what to think about that.