Bombings, explosions, no gun control – last week’s inhumanity reduced me to a Pat Benatar lyric, collateral LP muscle memory triggered by her perfect voice at the Moody on April 13. Tropico’s “A Crazy World Like This” (“sometimes I don’t know, what will ease the pain”) ricocheted at Old Settler’s Music Festival via Jerry Douglas.

“Crazy, crazy world we’re living in,” shook the head of the world’s foremost Dobro player on Saturday afternoon, Douglas then describing his band’s midnight encounter with a roadside candlelight vigil on the overnight drive to Dripping Springs. “Hats off to Texas,” he concluded doffing his straw hat.

In the face of OSMF’s unconscionable oversight – no watering station and by my count only a single vendor selling bottled water – Douglas’ hour-long salve went down thirst-quenching. Picture perfect weather, with a two-thirds-full moon suspended low and bright in the cloudless sky at 4pm, blessed another OSMF main day.

Douglas’ headlining set took flight with a cover of a “well-known blue grasser” – Weather Report, courtesy of Wayne Shorter’s “A Remark You Made.” Fiddle, drums, and Viktor Krauss’ electric double-bass on the lush ballad ebbed away some grief from the week’s toll. Rather than crying purple rain, the star’s purple electric Dobro radiated violet rays of bluegrass, the instrument’s wordless slide-guitar cry worth a 1,000 emotional hues.

OSMF’s ever diverse booking brought it one of its biggest Saturdays, but my wounds (R.I.P. Storm Thorgerson) yearned for bluegrass giant Doyle Lawson & Quicksilver. Headliner last year, the Tennessean mandolin great performed a Saturday OSMF set during a downpour there in 2010, as cathartic an experience as the Cotton Bowl singing “You Can’t Always Get What You Want” at the top of its lungs in a virtual crossfire hurricane for a Rolling Stones concert there in 1996.

When a new Quicksilver disc, Roads Well Traveled, arrived in the office on Friday, it left me starved for some acoustic woodshedding, virtuosity over volume. Jerry Douglas scratched that deep down itch like the soulful, good-natured human being that he is, but I needed a lot more than James Hunter’s UK R&B could offer.

At the hour that Austin’s gratefully reunited Reivers were taking OSMF back some 20 years, a dazzling jazzgrass pairing was delivering the last of nine dates on its current tour. Nickel Creek/Punch Brothers mandolin master Thile and contemporary jazz piano maestro Mehldau teamed at the Paramount Theater for what ideally should have been an OSMF booking that in reality required the pin-drop solemnity the full house downtown provided.

They say the fine art of conversation’s dead, but this duet symposium on greater American music debunked that deliberately, Thile’s piquant and percussive rhythmic strum ducking in and around Mehldau’s piano figures that fell like raindrops. For 90 minutes, everyone – including the two men onstage – seemingly held their breath.

Thile, in grad student garb – jeans, t-shirt, and hoodie – remains the Justin Timberlake of bluegass: a peerless entertainer of off-the-charts charisma and innate musical ability. Inhabiting the improvisational, moment-to-moment negotiation of jazz, he demonstrated not only exploratory wonders on his instrument, but did so with humor, heart, and maximum animation.

“It’s colder here today than it was in January,” remarked Thile. “How do you do that, Austin?”

Lustrous takes on Fiona Apple’s “Fast As You Can” and Elliot Smith’s “Independence Day” proved no match for Thile’s reading of warhorse standard “I Cover the Waterfront,” sung with riveting sincerity, his light tenor pleasingly tarnished with method actor grit. “All-purpose ass-kicker” according to Thile, Mehldau mostly played accompanist (“I’m not as witty as Chris,” he murmured), but in the duo’s always crystalline interplay, his was the chandelier the mandolinist danced atop with a ballerina’s soft-shoe grace.

Mehldau’s luminous, understated dexterity allowed his companion the freedom to solo like the Scarecrow from The Wizard of Oz on his new “Daughter of Eve,” herky-jerky like a marionette and equally witty, as crackling instrumentally as an ice flow. The sole encore of Bob Dylan’s “Don’t Think Twice It’s Alright” would’ve made Levon Helm guffaw.

By virtue of own his homemade banjola – a wooden banjo – David Eugene Edwards would most certainly make an eye-opening OSMF addition. Sixteen Horsepower’s rolling banjo on pre-alt.country fare set its Denver-based Americana goth apart from the rest of his major label grunge peers, and in Wovenhand, he’s taken it Old Testament.

Almost two hours after Thile & Mehldau took their last bow on Congress Ave., Edwards paused at the merchandise stand outside at Holy Mountain just off Red River. In black hat and feather, buttoned black shirt and vest, silver cross acting as choker, Edwards came off relaxed even as his black eyeliner deflected direct eye contact outside his own piercing gaze. Big in Europe, Wovenhand hadn’t been in Austin in a couple years he reckoned.

Where Sixteen Horsepower blew out the doors downstairs at Stubb’s in 2000 like no less than Nick Cave & the Bad Seeds, at Holy Mountain, Wovenhand’s post-punk punishment recalled Edwards’ minimalist touchstone, Joy Division. Exorcising material off the trio’s sixth and latest studio disc, The Laughing Stock, the frontman – grandson of a Nazarene pulpit pounder – never once addressed the healthy crowd onstage, instead inhabiting his fire and brimstone songs with Biblical menace.

“Run unto the Lord,” intoned Edwards at one point, which brought to mind the Doors’ frontman screaming, “You cannot petition the Lord with prayer!” 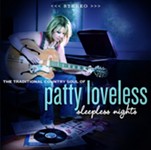 Patty & Jerry & Ian & Richard
All aboard the record roundup