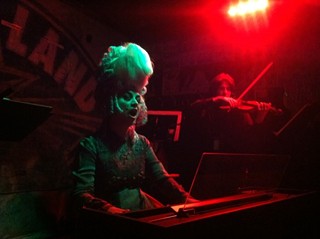 My nerves, on high from a snail-paced sojourn through Friday rush hour traffic, were calmed upon arrival at the Old Setter’s Music Festival. It was my fourth outing to the folk-ish fest and again I’d forgotten what a tranquil Hill Country scene awaited me. Perched on a grassy hill, I munched a fallen nut and reflected on how easy life can be.

While Son Volt wrapped up on the other end of the Salt Lick’s grounds in Dripping Springs, a densely-packed crowd gathered on the picturesque Bluebonnet stage for Grammy-winning revivalists the Carolina Chocolate Drops, who led off with a fiddle tune from their mentor Joe Thompson and a Charley Poole’s “Milwaukee Blues.”

After 80 minutes of folk perfection, the quartet closed a capella with Juneteenth anthem “Read ’Em John.” Backstage I asked Flemons what I might hear on their third album. He just sighed, “You’re going to be waiting a long time for that. A long, long time.”

“Now what song was it that you want to hear?,” he asked, showing off an infectious grin that goes so well with his perfectly slicked white hair and sharp country suit. An indiscernible barrage of song titles were shouted back at him.

“Oh, the last time I played that one was 10 years ago and I forgot all the words,” he laughed. “I forgot almost everything that night.”

He then led his quartet though a phenomenal version of “Rain and Snow.” McCoury earned his bluegrass wings as a vocalist for Bill Monroe, so it was especially fitting that the biggest applause of his set came during the Monroe and Hank Williams co-write “I’m Blue, I’m Lonesome,” which features a single ridiculously high note in the middle of the verse. When the 74 year-old singer hit that high and lonesome pitch, the crowd roared – knowing they’d just witnessed real bluegrass heritage.

“I’ve never see anything like this at Old Settlers!” exclaimed the poncho-wearing old-timer standing next to me as Michael Franti blasted off into his headlining set. Gone were the rows of camping chairs that had sat in front of the Hill Country stage all day. Now, the audience was shoulder-to-shoulder bouncing to Franti’s uptempo reggae-rap and trying to stay warm as the mercury dropped.

During his second song, the barefoot Franti ran to the side of the stage and shouted “Socks! Socks!” to the stage manager, who returned with a fresh pair of white socks for the singer’s frozen toes. Shoes would’ve been a more obvious choice, but they just don’t fit Franti’s image. Sure, his footprints clutter into some corny musical territories, but stylistic depth isn’t Michael Franti’s shtick. Unity is.

He’s a messenger, after all, pushing for peace, personal empowerment, and reminding us that we only have one life to live. When you’re surrounded by a bunch of happy folks on a beautiful piece of land, it’s hard to argue with that.

The next morning, while taping a performance for KAOS Radio, I saw the other side of Old Setter’s in the campground where jars of moonshine are shared, children run in packs, and the sounds of acoustic guitars, banjos, and singing come from every direction. I could’ve bummed around this tented utopia all day, but I had a couple more festivals back in Austin to attend.

There’s nothing out of the ordinary about people getting stoned at Auditorium Shores, but during Austin Reggae Fest, all discretion goes up in smoke as groups of uncomfortably high 17-year-olds sit on a blankets passing around two-foot glass bongs. Within moments of my arrival, strangers got me lifted and I gravitated away from the din of the main stage to something more tasteful.

Passing the predictably long line at the corn dog stand, I arrived at a tent called Charlie’s Dub Corner and posted up to watch local producer McPullish cut live mixes of hard dub originals. The proprietor of his own label, Charlie’s Records, McPullish played recordings from his newly released Shepherd Riddim, while guest vocalists like lion-voiced Judge and the captivating Jamaican/British reggae songstress Island Rose toasted on the mix.

It was so good that when someone told me, “Dude, Lance Armstrong’s over there playing drums with Lance Herbstrong!” I replied, “Good for him” and stayed where I was. Turns out that was the truth, the cycling champion, currently barred form competing for using banned substances, taking to the kit and playing four songs with the local party band.

After brief stop at Jimmy Johns where I heroically devoured two full subs, I made my way to Red River to experience my third festival of the day: Convergence XIX. A national meet-up for the Goth community, who, by popular vote, selected Austin as this year’s site, Convergence is more conference and less festival. As predicted, there were lots of guys in leather boots, girls in corsets, black hair dye all around, and I was the only one wearing a yellow shirt.

Inside Beerland, I found Lacy Rose in full Victorian gown and powdered wig, playing operatic ghost songs on a harpsichord with a small classical ensemble behind her.

“You’re the best audience I’ve ever had,” gushed the local between haunted melodies. “It’s because we’re all from the same soul – the same dark soul.”

Still high from Reggae Fest, I got a little creeped out and escaped next door to Elysium where lanky rocker William Faith and his Chicago-based concern the Bellwether Syndicate pummeled the audience with some muscular Gothic rock. Next, guitar and synth NYC trio Led Er Est unleashed an untailored swell of psychedelic drone guitar, analog blips, and house beats.

“This is the underground right here,” he told me – not in reference to the woman in a pyramid spiked bra and leather suit standing near us, but about the Goth scene and its musical, fashion, and lifestyle interests.

Convergence, he says, started at the advent of the Internet, when followers of the alt.goth message board devised a way to meet up in person and listen to the same bands. Adams pointed out that Austin’s an ideal site for the wandering conference.

“Convergence is a DIY event without leadership that moves every year, so – in a way – it’s about the host city showing itself off,” he explained. “It showcases our local bands, our local artists, our vendors, and local sights that the events are centered around.”

“Goths watching bats – that’s just such a perfect context,” he laughed. “Austin’s built for an event like this, and we’re so used to festivals and conventions that we can put this on and never miss a beat.” 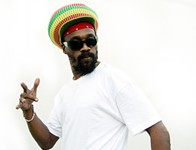 Five Essential Acts to Check Out at the Austin Reggae Festival