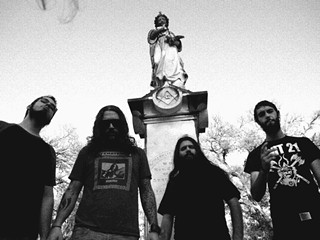 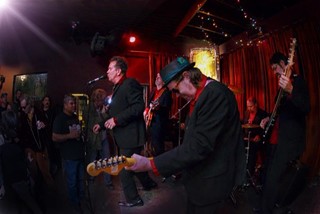 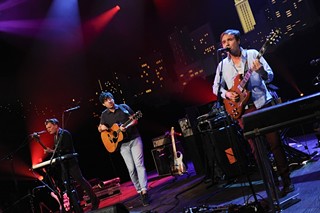 Rust rises from the graveyard

While at a house party Saturday night, I found a piece of forgotten birthday cake, so I bit off the top and threw the rest into the yard. An onlooker nodded, “A cake’s only as good as its icing.” What an adage. I immediately thought of Grizzly Bear’s Austin City Limits taping earlier in the week.

It was my first time seeing the cherished indie pop band. As promised, the music was impressive, generating solid grooves off their top-notch rhythm section and nailing those whimsical vocal harmonies. Still, I didn’t enjoy one second of it because their singer, Edward Droste, bugged the shit out of me.

It was his lack of showmanship. With spiritless stage presence, closed-eyed delivery, the constant fixing of his hair, and allowing awkward segues between songs, Droste shirks his elemental duty as a frontman: to entertain.

“This is a weird hybrid of a real show and a not real show, but we’re here,” the vocalist thanklessly announced, appearing less-than-honored to be featured on the 39th season of the best music show ever. “Sorry, we’re really bad at stage banter.”

It was seeing their big tour bus parked outside. Six months ago, Grizzly Bear was the subject of a popular New York Magazine article that found Droste complaining that his band doesn’t make a proportionate amount of money for the success they’ve had. Here’s a cost-cutting idea: get rid of that hotel room on wheels that gets four miles to the gallon and stop bitching.

Worst of all, Droste uses instruments as little more than fashion accessories. Forget about his minimalist tambourine playing and whatever it is he’s doing with that electronic autoharp, the guy flat out sucks at guitar. That might fly in New York’s style-over-substance indie scene, but here in Austin, where Droste’s six-string skills wouldn’t even pass Kids Rock Camp, I call bullshit. I’ll go out on a limb and say he’s probably the worst guitarist to ever play on the Moody’s stage.

Yes, I understand. I’m alone in hating this band. Polling audience members after Austin City Limits let out, I was assured that it was an “amazing” performance – a sentiment confirmed by many of my friends and colleagues who saw the band last week. I just can’t get past my disdain for their lead singer. It’s like a wise man once said: “A cake’s only as good as its icing.”

Droste is the icing that makes me want to throw up.

Two days later, I attended a benefit concert at the Longbranch Inn for local singer and visual artist David Duet, who’d been laid up in the hospital for a month with an infected hand. The guest of honor was in attendance, wearing a hospital gown as he watched Shooting Pains, the Hickoids, and Churchwood perform.

The latter, a blotter-acid blues band with dual guitar riffing and a lead singer that reminds me of Tom Waits reading poetry on Ritalin, is an absolute must-see local act. They join the Pocket Fishrman’s yearly Fish Fry next Sunday at the Scoot Inn, which will mark the return of Duet onstage when El Pathos plays.

On Friday, I watched Austin’s Flesh Lights set a high bar for the night’s entertainment at Mohawk as opener for Hunters and Bleached. While the headliners – better live than on disc – played to a sardine-packed sell-out crowd in the small inside room, all I could think about was how much they recalled the Eighties punk-pop of the Go Go’s.

Earlier that week, news broke on the Go Go’s website that they’d parted ways with local bassist Kathy Valentine due to irreconcilable differences. I contacted Valentine, who corrected me, saying that Bleached is “way more like the Bangles than the Go Go’s,” but declined to comment on the split at this time.

Spanning the varied sub-genres of Austin’s metal community, the lineup features the poisonous sludge of Rust, led by Dustin Bolf’s demonic howl over bone-saw guitar riffs and a wrecking ball rhythms. They share the bill with Sweat Lodge, an epic psych metal band with wailing vocals and the ubiquitous Hotel Vegas rhythm section of Caleb Dawson and Austin Shockley.

Headlining will be local Prosthetic Records artists Ancient VVisdom, a bulldozer of haunting folk-metal reminiscent of a blackened Alice in Chains.