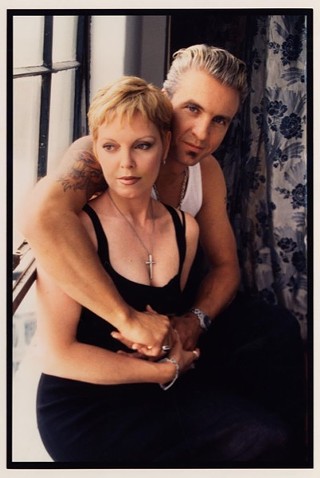 Pat Benatar plays the Moody Theater tomorrow night, Saturday. “Heartbreaker,” “Hit Me With Your Best Shot,” “Hell is for Children,” “Love is a Bettlefield” – all remain synonymous with her name. So, too, should her guitarist and husband of 31 years, Neil Giraldo, the producer, arranger, “creator” to her “facilitator” and five-octave voice.

Austin Chronicle: In the liner notes to 1999’s 3-CD career overview Synchronistic Wanderings, you’re quoted with, “We perform this song quite often now” in regards to one of my favorite Pat Benatar songs, “My Clone Sleeps Alone.” That still true? What more can you tell me about this track? I like that it predates Blade Runner.

Neil Giraldo: It was true up to about four years ago. We haven’t done it for awhile, but it’s one of those interesting songs and maybe I’ll put it back in again. It was just a humorous twist on people having clones, and how you can live your life the way you want and have your clone take care of all the things that you don’t want to take care of. It was just a way of making something really funny and tweaky since Patricia and I both like science fiction. I like the idea of playing piano on it in the beginning and making it sound kind of campy in a way, and then turning it into an uptempo thing.

AC: In the Heat of Night boasts three Chinn/Chapman compositions. Those two were such a great, often overlooked songwriting team, from the Sweet to Huey Lewis. What was it like working with them?

NG: Well, I worked with Mike Chapman more than Nicky Chinn. But, they weren’t really overlooked. They had a lot of hits with Sweet and various other bands. Mike Chapman was great. When I was playing with Rick Derringer, he was the person that said, “There’s this young girl that wants to put a band together and is looking for a partner, and I think you’re the perfect guy.” He’s the one who had me meet Patricia way before anything was established, and that’s how we became partners from the very beginning.

So, I’m not going to ever say anything bad about Mike. He’s a brilliant producer and a great writer – really great. And he’s easy to work with in the studio. I learned a lot from him. We only did three tracks together and I didn’t spend a whole lot of time with him, but Mike is a great producer and a good guy.

AC: You blossomed as a songwriter on 1984’s Tropico. Was it Pat’s pregnancy? Does your daughter Haley claim any kinship to it? Is there a better Pat Benatar album?

NG: No, it didn’t have anything to do with the pregnancy. It was probably some difficult times preceding it that made me a little more introverted. I looked more inside where I was and who I was. So it was easier for me to write from a difficult vantage point so to speak. With Tropico, I wanted to tone down our sound a little. I didn’t want it to be an over-driven guitar record, and I thought we should have textures to it – experiment with some rhythms and lighter tones, and acoustic guitars. Things like that. It just kind of happened that the pregnancy and that all occurred at the same time. But, as for Haley, sure she’ll take anything!

When it comes to the albums, I like them all. I like what happened on each one of them. There are things that, of course, if I had the chance I’d remix and do a little differently maybe. But, each one had its purpose for when we were making it, and it reflected the time and how we felt. The only one that was the most difficult was Seven the Hard Way.

AC: You have plenty of musical accomplishments outside you and Pat, including Rick Springfield’s Working Class Dog. What do you consider your best work in that arena and why?

NG: It might be the John Waite record that I produced. We had a couple of great moments on that record. It was called Ignition. I felt that it was the first time John Waite really felt like a rocker. I think that I turned it up the right way for him. There’s a song called “Mr. Wonderful” on there that I believe is tremendous. It’s got a great vibe. But, you know, “Jessie’s Girl” isn’t bad. There are quite a few other hits that I’ve done with people that I’m proud of as well. I can’t pick a favorite there either.

AC: You’re from Cleveland, home to the Rock & Roll Hall of Fame. In what way, if any, did Cleveland shape you as a musician? Ohio counts many, many musical greats.

NG: It was a steel town with really bad weather and really aggressive attitudes. That’s what shaped me as a musician. There were small clubs that we played. As a kid, I played when I was 14 and I’d have to sneak in through the back because I was underage. You just had to do those things, and you had to be tough. It all makes you mentally tough, because things aren’t just given to you, and you have to work really hard. That what shapes you as a musician and a person, and that’s what it did for me.

AC: Your wife and you celebrated 31 years of marriage in February. What’s the secret to a “showbiz” marriage and will either of your daughters follow into the family business?

NG: We’ve been together 35 years, and basically we were married from day one. We just didn’t have the paperwork or a ring. But, we were together from the moment we met each other. So, there are a couple of secrets: 1) I’m a passive guy and she’s always right, and 2) We have the ultimate respect for one another, and she lets me do what I need to do. Another thing is she’s a great facilitator. I’m the creator, but she’s always had an opinion. When you have that kind of respect for one another, you can’t really mess up. So, that’s the secret.

Our daughters will both probably follow into the business, but I don’t know what capacity it will be. I’m not sure if they’ll be playing, singing, arranging, producing, or managing. But, they’ll be in it some way.

NG: Austin, talk about a capital for music! There are great musicians, great guitar players. I was there when Stevie Ray Vaughan was playing the Continental Club. The place was packed and I thought Stevie was great. I don’t remember what year it was, but it was a really great encounter. Another time was when Patricia and I had about three days off in Austin and we stayed at a hotel right down by the river. We had the best time there kicking back and enjoying the music scene and the food. It was just that whole great Austin vibe.