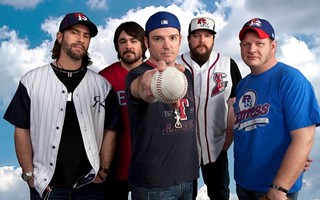 It’s that All-American time of year again – bats, balls, hot dogs – so Reckless Kelly’s Willy Braun and I got together to talk about baseball. Now in its fifth year, the local roots rocker’s annual Celebrity Softball Jam takes to the field this Sunday at the Round Rock Express Dell Diamond.

This year’s roster of musical ballplayers is deep, leading off with Brauns Micky and Gary in Micky & the Motorcars. From there, tick off such names as Hayes Carll, Bruce & Charlie Robison, Kelly Willis, Dale Watson, Cody Canada & the Departed, Asleep at the Wheel’s Ray Benson, Roger Creager, the Trishas, this year’s Austin Music Awards winner for Best U-18 act, the Peterson Brothers, and more.

“[My brother] Cody and I wanted to play baseball with our musician buddies,” shrugs Willy. “The idea became a charity event and a concert.

“The proceeds go to the Miracle League and various little leagues. We really feel like baseball is something every kid should be able to experience and something that helps kids develop skills and life experience.

“Cody and I are the team managers. His team is the Sultans of Sing and mine is the One Hit Wonders. This year is the rubber match. We’re tied 2-2 after four years, so this is a big one. We keep the same players on each team every year and the rivalry is pretty intense.”

Braun favors the Boston Red Sox; his mother’s from Massachustes. Brother Cody is a Yankees fan, to which Willy laughs.

“Cody and I don't get along very well in October.”

Touring as a kid in his dad’s band, Muzzie Braun & the Boys, Braun played baseball “sandlot style.” They even built a field behind their house with bleachers. Plenty of parallels between the two sports – music and baseball.

“Ball players want to be rock stars and rock stars wanna be ball players,” chuckles Willy. “We’re all on the road a lot and are passionate about what we do.”

According to Braun, his buddy Matt Belisle, a Colorado Rockies pitcher, put it best: “Our jobs are pretty much the same, except you guys win every night.”

“Every time I watch a game, I see something I’ve never seen before. Every situation is unique and you can’t predict what will happen next. You can’t say that about any other sport. People talk about strategy in basketball and I don’t get it. What’s the strategy? Run down to the other side of the room and make a basket?

“Basketball is fine, and so are all the other team sports, but baseball is the only one that changes with every pitch, play, and call. Baseball requires a separate thought process and strategy for every single play.”

Braun’s advice for young musicians: “Work on your craft and do your homework. Listen to as much music as you can. Remember: amateurs borrow, professionals steal.”

The Peterson Brothers and my band, the Seaside Swifts, play before the game at the Celebrity Jam. The concert afterward features Benson, Carll, and Los Lonely Boys.

My band’s drummer and trumpet player’s grandfather, Mickey Rutner, was a noted ball player for the Athletics. Before he died, Rutner threw out the first pitch at Dell Diamond for an Express game in 2006.

Braun proclaims, “Baseball is everything. I think everyone should be able to play ball.”