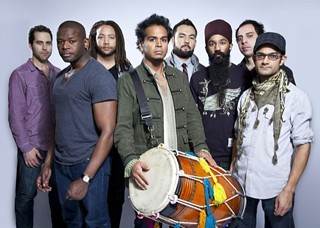 The Brooklyn octet formed in the tradition of brass bands from Northern India, yet incorporate a litany of influences, including New Orleans second line, go-go, and hip-hop. We caught up with bandleader and dohl drummer Sunny Jain to get the skinny on the band’s big sound after catching the band at South by Southwest last month. In fact, here’s a bit of video I shot:

Austin Chronicle: I saw you in Austin a couple weeks ago for South by Southwest and I have to say, you guys put on a crazy live show. I saw some people completely lost in ecstatic dance. What’s it about your live show that makes people just completely lose it like that?

Sunny Jain: I don’t have the answer to that. What we concentrate and focus on doing is going out with 100 percent heart, passion, and energy in everything we do onstage. I think people are attracted to that. Having been a spectator to many concerts and shows, when you see people having fun onstage it’s infectious. Just like laughter is infectious, good vibes and joy is infectious. People see that, but they also hear the joy and passion in our music and feel the energy and that visceral emotion coming through the brass and the drums.

It’s a powerful sound and it makes an impact right in the gut. Those rhythms just make you move – those Punjabi rhythms get people shrugging their shoulders. We’re fortunate to be playing the right music right now and it’s translating to people.

AC: It’s really interesting to see a band with percussion out front as the lead instrument. Tell me more about the dohl drum that you play and how it’s used in traditional Indian music.

SJ: The dohl instrument is kind of synonymous with Punjab in Northwest India, but it travels throughout India and is most prominently and popularly known in Bollywood music. I think its origins are actually Persian as well, and eventually it made its way through India. It’s had a long history in Punjab. It’s associated with the harvest season and it’s an outdoor drum. The music and dance of Punjabi folk rhythms are directly from the farmers working out in the fields and pulling the crops, so a lot of the dance moves and music and beats are from that. It came into prominence with bhangra music and the commerciality of bhangra music, plus UK DJs and then Bollywood music.

When partition happened in 1947, Punjab got split into Western Punjab – Pakistan – and Eastern Punjab, which became part of India. It did something different with the music. Eastern Punjab sided more with what’s called dohl, which is known as the rhythm that people generically called bhangra music. On the western side what became popular was a rhythm called dhammal and that’s very prominent in Sufi music – the trance sort-of whirling dervish music of Pakistan. There are a lot of different rhythms and traditions that have exploded in Western Punjab, but the dohl is still very synonymous with Punjabi culture.

The dohl is a wooden barrel instrument typically made with two goatskin heads, although my drum just has one on the bass side and I use a synthetic head on the high-pitched side. On the high-pitched side, I’m using a very thin stick made out of bamboo so I can also get the retroflex, which you probably heard the other night – some of those rolls and bounces and things. The other side I just use a curved stick that you hit with the curved side to get a lot of surface area and boom on the bass side.

AC: Beyond Indian music the most obvious element seems to be the second line brass thing you have going on. How did you become interested in the music of New Orleans?

SJ: I actually started the band in the spirit of the brass band tradition of India, which dates back to the 18th century when colonial Europeans basically dropped off a bunch of brass instruments and snare drums. I was born and raised here in upstate New York, but my first conscious recollection of going back to India was for my uncle’s wedding and there was a baraat band there. A baraat is essentially a procession that happens from a groom’s side to the bride’s side right before the wedding takes place. It involves singing and dancing and dohl drummers show up. There’s a decorated horse that the groom gets on and brass bands usually show up.

So this brass band shows up and I was five years old. I’m in a foreign land as far as I’m concerned, and I’m just like, “Whoa, what is going on?” There was an 11-piece brass band just blasting and these dohl drummers show up and start banging away. In subsequent trips to India, I learned that there are numerous brass bands in India. It’s almost like the territory bands of the Thirties here in the States. There’s like 30 different brass bands in each city and they’re used in all sorts of different auspicious occasions, celebrations, and weddings.

So when I started this whole thing, I was really coming from that perspective, but also jazz but not necessarily New Orleans brass. I’m a drum set player as well, and grew up with bebop, Sixties Miles Davis Quintet, and other modern and contemporary jazz. So I wanted improvisation to definitely be a strong component of it even though I was mostly coming from that Indian brass band tradition.

What happened was shortly after the band started, people started making the relationship with New Orleans, so I was like, okay, I need to dig in and find out what everyone’s talking about because I’m not hip to this. I basically learned about Dixieland and ragtime, but wasn’t hip to what was going on right now in New Orleans, bands such as Soul Rebels and Stooges, Glen David Andrews – I wasn’t hip to what was happening right now. That’s when it became obvious that there was this direct relationship.

I hear the relationship that people hear. I think it’s the buoyancy of the rhythms. Those Punjabi rhythms just fit into New Orleans brass music or hip-hop or go-go. It has swing, it’s not straight – it’s not rock & roll. I think that’s what people are hearing and it’s been great. We’ve been fortunate enough to go down to New Orleans a ton of times and be adopted, so to speak, by the fans there and even the musicians. They hear the relationship. They hear New Orleans in our sound which is beautiful. It’s an honor.

AC: So it sounds like culturally brass bands are used in a similar context in India and New Orleans.

SJ: I’ve read various books on it and tried to figure out why is it that there’s this relationship and cross-rhythm with the New Orleans sound and those rhythms of Punjab and I don’t really know what it is or why it is. I guess it just points to the fact that music is universal. I’m sure you could go back and find a derivative of how it was all connected, but I haven’t been able to find that. It’s very curious and interesting that it’s so similar.

AC: Your band is rooted in this wedding music tradition of Northern India. How is what you do onstage different than what you’d hear at an Indian wedding?

SJ: The roots are there and the vision is there, with that underpinning of Punjabi rhythms and melodies and Indian brass band, but certainly I wasn’t trying to just replicate that because I’m American and everyone in the band comes from a different background. The idea was to use that and grow elsewhere so there’s a great amount of differences. There’s a lot of improvisation happening, because a lot of the guys come from a jazz background. There’s also some ska and reggae influence. There are classical arrangers and composers in the band and there’s hip-hop. Everyone comes from a different experience, so when you blend it all together it almost feels like living in Brooklyn.

In Brooklyn, you walk down the street and there’s someone blasting Jay-Z and then a block away you hear a jazz saxophone player playing in his room and you turn the corner and you hear someone playing Shostakovich or whatever right near St. Joseph’s College. Red Baraat to me just seems to have that sound, that attachment to Brooklyn, where there’s so many things. And it sounds ridiculous talking about it, but you’ve heard it so at least you get it.

I don’t really know how to describe it, how to put it into something digestible that’s a few words and makes sense. It’s almost something you need to hear to understand why it works and why it’s happening. What’s different is we’re not just trying to be an Indian brass band. We’re all Americans and we’re borrowing from things we grew up with.

AC: You mentioned jazz and improv and watching you perform live it was obvious that a lot of the guys had a jazz background. How much improvisation is happening onstage?

SJ: There’s a good deal. There are certainly structures and parameters in the songs just as there are in jazz, but there’s room for soloing. A lot of the brass players are taking solos, and the drummers take solos now and again. I’ll do some spontaneous conducting, cuing people out and stripping it down so that it starts with a duo. But we know we’re in an eight-bar-chord change cycle, so we’ll keep that going and I’ll start cuing people in and we’ll build it up. It grows and progresses and changes every time we play and that’s what keeps it interesting for us and therefore keeps it interesting for the audience.

We’re not just coming onstage and performing our set-list like we do every night. The crowd, the energy, the venue, how we’re feeling – everything impacts what we do with the music. There’s certainly a structure, and there has to be with the melodies and rhythms we’re playing, but there’s plenty left open for improvisation.

AC: The new album is Shruggy Ji. What does that mean?

SJ: It’s kind of like this character that lives in all of us that follows us around during the day, like that shadow next to us marking our every move, and you can’t really get rid of it until night time when you enter a dance club and your inhibitions fall to the wayside and you start moving and expressing yourself through dance. “Shruggy” is eluding to the Punjabi dance where you’re shrugging your shoulders and “Ji” is a form of respect in Hindi. So “Shruggy Ji” is indicating that personality that lives within in all of us that can be unlocked on the dance floor.

AC: And this is a character of your own invention?

SJ: [Laughing] Yeah, it was totally my invention, just messing around and having fun. Everyone has this potential to unlock themselves. You just gotta do it and let yourself move to the dohl drum.