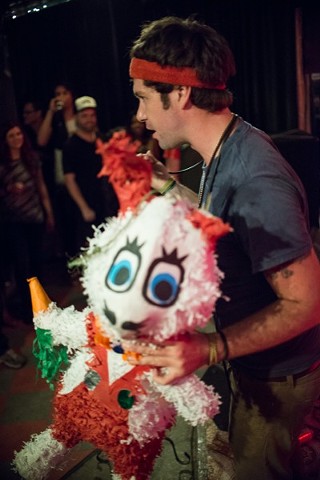 I probably owe the White Horse an apology for turning their bar into a Slip ‘n Slide with the Fritos and condom-filled piñata I detonated during Cunto!’s set there on Saturday night. I didn’t foresee the combination of corn chip grease and lube causing both the band and audience to fall over repeatedly.

When they had to move everyone from the dance floor and mop it with Pine Sol, I felt like the kid who pissed in the swimming pool and ruined everyone’s fun. My bad.

One the brighter side, the three-band bill of Cunto!, Black Eyed Vermillion, and East Cameron Folkcore pushed acoustic instruments to their sonic limits and testified that punk isn’t dead – it’s just wearing a folk music skin suit. The former I’ve chronicled personally, while the latter absolutely kills it every time they play on their home court (banjo player Denis O’Donnell co-owns the bar), but that night especially felt like a revolution the way everyone in the packed crowd had their fist in the air singing along.

The day before, local bard Shakey Graves played an afternoon show at the White Horse so that ESPN could tape footage to accompany a televised NASCAR event. This demonstrates two things: 1) Graves’ career is taking off. 2) NASCAR continues diversifying beyond Toby Keith and dad-rock. Good for both of ’em.

John Wesley Coleman dropped by my house last week to deliver his latest vinyl, Trans Am Summer Blues, which features impressive guitar work from Flesh Lights’ Maxwell Vandever. Coleman compared playing guitar with Max to an old boxer trading punches with a fresh young fighter. Wes got an encore at Trailer Space on Thursday, then got rowdy with his band the Golden Boys on Friday at the Red 7 for local bar czar Johnny Sarkis’ birthday party.

“We know Bobby Jealousy had a lot of potential, but we need to go where the money is, and the money’s in Nashville,” Ellis told Playback. “We’re already working on a sassy tune for a big star whose name rhymes with Harry Sunderwood.”

Their show tonight at Hotel Vegas will be the last performance under the Bobby Jealousy moniker before they change their name to Lovers Under the Stars. Listen to the new jams here and here.

• Local party people Learning Secrets host acclaimed German disco/house producer Tensnake tonight. “To say it’s a dream booking is kind of an understatement,” says Learning Secrets’ Jeramy Nugent, who’s been booking DJs in town for nine years. “We’ve been trying to get him here for so long and we finally snagged him while he’s in the U.S. for WMC and Ultra Fest.” Tensnake goes off at downtown dance club Kingdom tonight at 10pm. Tickets are $15 pre-sale and $20 at the door.

• Punx Picnic returns to Austin for a second year with a new location and later calendar date. A little background: Punx Picnics are a loosely organized network of international mini fests celebrating punk, thrash, hardcore, and other related genres along with drunken activities like punk rock soccer.

Last year’s ATX Punk Picnic coincided with a February cold front, so this year the organizers have smartly moved it to May 10-12. The festivities go down at the Carson Creek Ranch, the same venue as Austin Psych Fest. Confirmed performers include Urban Waste, Total Chaos, Symbol Six, and Toxic Rott. Cheap single day tickets and weekend passes are available here.