The U21 Guide to SXSW 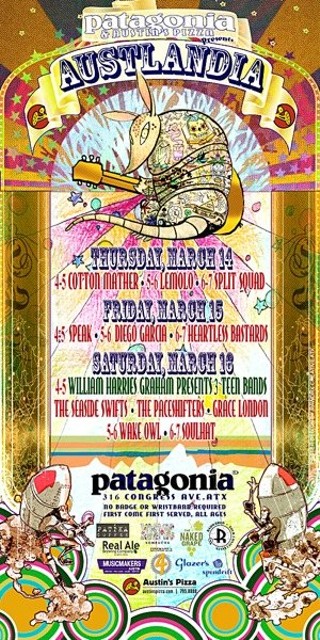 South by Southwest showcases are generally closed to the under-21 set, but the first time, this year SXSW has an official showcase that’s all ages: Saturday, March 16, at the Palm Door (401 Sabine). The Youngbloods Showcase is the brainchild of myself and late SXSW Creative Director Brent Grulke, with production by Brad First.

• Maria’s Taco Xpress (2529 S. Lamar Blvd.), hosts cool all-ages day parties Wednesday through Saturday from noon-9pm. You could go there daily – skip the rest and say you saw the best.

• Patagonia (316 Congress Ave.) presents Austlandia Thursday through Saturday, 4-7pm. New this year and expected to be one of the best.

• Austin Music Awards: If there’s one show that you must attend during SXSW it’s the AMAs at the Austin Music Hall (208 Nueces St.), the hallmark of Chronicle Senior Music Writer Margaret Moser. I’ve been attending since I was a baby in a sling.

• Another tradition for me: SXSoupFest at Guero’s (1412 South Congress Ave.), featuring the Birds of Chicago, Michael Fracasso, and Moonlight Towers.

Catch the Youngbloods Party specifically for the U21 crowd at the Continental Club Gallery (1315 S. Congress Ave., above the tattoo shop), 3-7pm.

• One of the best SoCo parties every year is at Yard Dog (1510 S. Congress Ave.), featuring Kelly Willis & Bruce Robison, Ian McLagan, Jon Langford, and the Silos. They also have day parties on Thursday and Friday.

• Patagonia Austlandia dedicates the 4pm hour to U21 bands: the Seaside Swifts, Grace London, and the Paceshifters.