Hoping to get noticed in Germany via the music festival 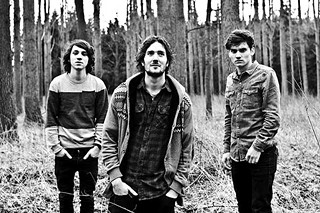 The Paceshifters (by Gerard Rouw)

The Paceshifters started out as brothers Paul and Seb Dokman, practicing in their attic in the Netherlands. Soon they added drummer Koen Klarenbeek. Paul describes the band as “a high voltage rock trio.”

“Our ultimate goal is total and complete world domination,” he continues. “The tools to reach this goal are uncompromisingly honest rock and touring endlessly with sweat and blood on stage.”

“When we were 8 years old we played a lot of Ramones songs,” adds Seb.

A few years down the line, the Paceshifters found themselves recording in Durango, Co., at Kozy Tone Studios with Ed Stasium, who produced the Ramones and has worked with Mick Jagger and the Talking Heads. Lately they’ve been touring Europe with the Supersuckers.

“In Holland, we really keep an eye on the American bands,” Klarenbeek explains. “When they come over to Europe people often think, ‘Wow, that’s a band from the U.S.! That must a great band!’ Sometimes the Dutch people forget to look at their own bands. And we think in the U.S. people are often very proud of their own bands.

“I don’t think there’s a big difference musically. And in Holland we do get some financial support for costs such as coming over to South by Southwest.”

Their take on this generation of music?

“Music is way more compact these days in the mainstream,” offers Paul. “The music we make is based on the previous generations. There are a lot of bands that are influenced by music from the Sixties and Seventies. It’s become a lot easier to make music these days and there are a lot of awesome bands out there.

“That’s made things easier, but also harder in a way.”

“We write most of our songs together,” says Seb. “Usually someone comes up with a cool riff, beat, or melody, which we start working on together. Sometimes we don’t even have anything and just start jamming.”

“Of course, it would be great if a record label or booker is interested in our band that could help us to start focusing outside the Netherlands,” admits Seb. “And strangely enough we would really like to start focusing more on Germany. South by Southwest is a big deal in Europe, so we wanted to play it so we would be noticed in Germany as well.”

Plans for the future?

Klarenbeek: “Making many records, tour the world, and have a lot of fun while doing so.“