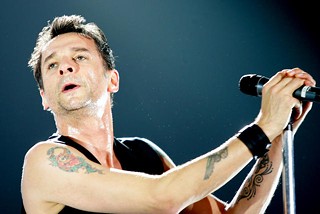 After that, it wasn’t much of a stretch to believe an official showcase would follow, but in the wake of other big confirmations – like Natalie Maines yesterday – most had already moved on. Now, fans get a chance to preview Depeche Mode’s new album Delta Machine, out March 26. So far, only the slow and uplifting “Heaven” has been released, Delta Machine again matching the Brits with Eric Hiliar, who produced their Sounds of the Universe and Playing the Angel albums.

Depeche Mode powers up at 10pm after sets by local synth chicks Feathers and radio ready pop band Neighbourhood. Swedish DJ Eric Prydz follows up the main event. Feeling lucky? Another ticket lottery, open to SXSW Platinum and Music badgeholders, will determine who gets in.

Details of the band’s 2013 North American tour are scheduled to emerge in a few weeks.