Dixie Chick and ‘Mother’ of two previews her solo debut 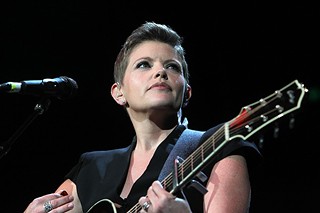 On the eve of the Iraq invasion March 19, 2003, Dixie Chicks frontwoman Natalie Maines told London concertgoers she was ashamed President George Bush was from Texas, her home. As a result, country radio stations across the country pulled the Chicks from rotation. Almost 10 years to the day, Maines has confirmed a SXSW showcase.

Announced this morning, Maines will roll out material from her upcoming solo debut at ACL Live Moody Theater on Wednesday, March 13, 9:45pm. She’s also slated for the Central Presbyterian Church on Friday at midnight. In another bite to the hand that feeds, the 10-song Columbia Records LP, Mother, pulls away from country according to the chanteuse.

“I wanted this music to be very different from the Dixie Chicks,” announced Maines on the SXSW website. “Lots of albums from lead singers might just as well have been made by the band, but I think this is very different from anything the Chicks could make.”

Maines loaded into friend Ben Harper’s L.A. studio last spring to start recording tracks, one of the first of which was her rendition of Pink Floyd’s “Mother.” When Maines sings the song, it’s both tender and anxious, though not nearly as menacing as the original, or some gooey remake from the mother of two. She tackles Roger Waters’ iconic song full-force, with the same fearless ideals she’s demonstrated since day one with the Dixie Chicks.

In 2003, as the media vilified Maines for her right to freedom of speech, Oklahoman country star Toby Keith rolled out a Photoshop portrait of Maines standing with Saddam Hussein on his Shock’n Y’all tour. Despite a seemingly insurmountable blacklist, Maines and the Chicks won five Grammy awards for their 2006 album, Taking the Long Way. To this day, my hometown country radio station bars the Dixie Chicks from its playlists.