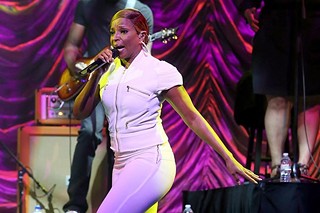 My SXSW was mindblowing. Dome ripping. Doesn’t start until Thursday, but as a host, I don’t get to enjoy it – much. Moby Grape, Stooges, and PJ Harvey fell on my lone Saturdays off, but I missed Metallica, Bruce Springsteen, and worst of all, Flower Traveling Band. Mary J. Blige Wednesday at the Moody makes up for most of it – final name on my bucket list.

ACL Live at the Moody Theater hosts Green Day two weeks from today, perhaps the über SXSW slot as precedented by Springsteen & the E Street Band last March. Stadium acts in a small room as led by two men of the people, Bruce and Billie Joe Armstrong. Not quite as riot-gear ready as Norah Jones at the miniscule Clay Pit during SXSW 2002, but exclusivity remains directly proportional to venue size in the rock & roll theatre.

Mary J. Blige didn’t show up on any SXSW band list, of course, because she wasn’t showcasing. Rather, the soul superstar likely constituted rodeo run-off given her appearance tonight at Reliant Stadium in Houston for Bay Town’s annual ridin’, runnin’, bustin’ rawhide competition. The Austin Rodeo begins a week from today at the Travis County Expo Center, roping in Alabama Shakes, Merle Haggard, and Three Dog Night, but MJB’s appearance here this week no doubt originally coincided with an off-night on the tour schedule. What a break.

Before Stevie Wonder began touring again in 2006 thanks to his late mother coming to him in a dream and telling him to get back out on the road, he and Plácido Domingo sat side-by-side on my bucket list. The former crowned two decades of my tracking down as many of the great soul men as possible: Wilson Pickett, Smokey Robinson, Ray Charles, James Brown, Al Green, Little Richard, Fats Domino, Solomon Burke, Prince, D’Angelo, Nas, Jay Z, Ice T, Ice Cube, B.B. King, John Lee Hooker, Robert Lockwood Jr., Jimmy Scott, Charles Brown, etc.

After Wonder played a private party at the Frank Erwin Center in the late Nineties and I read about it with horror and disgust the morning after in the local daily, I waited another decade for the opportunity to see him perform. Everything promised in the name “Stevie Wonder” came signed, sealed, and delivered live in Houston. The second time around, at the Austin City Limits Music Festival in 2011, played out even better, my wife and I getting up close to the stage and basking in the Motown maven’s sheer Wonderfulness.

Concurrent to Wonder’s reemergence back into the limelight and on the road, somewhere between 2005’s The Breakthrough and Growing Pains two years later, MJB blipped on my radar. After interviewing, meeting, and witnessing not one but two Plácido Domingo shows – an opera, and a four-hour concert (plus a rehearsal) – what could possibly be left I thought? One name flashed inexplicably in my head: Mary J. Blige.

Knocked out by the aforementioned CDs, I knew none of her hits or musical history otherwise. Intuition, perhaps, this faint sense of, “One of the last great soul queens,” whispered her name to me. Remarkably, there weren’t any others on my list, just MJB, for reasons I still can’t quite explain. And indeed, as she quaked the Moody for 80 minutes – shook it, rattled it, rolled it – my mind stumbled through my previous conquests: Nina Simone, Aretha Franklin, Diana Ross, Gladys Knight, Etta James, Koko Taylor, Donna Summer, Sade, Abbey Lincoln, Dee Dee Bridgewater, Betty Carter, Roberta Flack, Erykah Badu, Alicia Keys, Anita Baker, Meshell Ndegeocello, Betty Lavette, Sugar Pie Desanto, Tina Turner, Sharon Jones.

None of them held a candle to Mary J. Blige.

In the feminine concert wardrobe equivalent to tighty whities – an all white, skintight, two-piece tease, with zippers and her tattoos peaking out at the shoulders – MJB stalked out in knee-high black leather boots with long rows of silver studs and six-inch ice pick heels. Her golden hair played good cop to her badass black sunglasses, onion ring-sized earring bling dancing between the two. Drums, bass, guitar, synth, and three ladies on the harmony riser drove her opening declaration, “Ain’t Nobody” and “Family Affair,” and as ladies in the house let out both a high-pitched scream and all the words to each song, MJB stamped out mad rodeo dance moves, while pointedly belting out Bronx-born lyrics about owning your destiny. Only my ear to ear grin from the third row kept my jaw attached against incredulity.

Midway through “Feel Inside,” she took off her glasses, closed her eyes, and let her street evangelist voice rip through her body at full force gale. Relieved, she blinked and looked around the theater. From my vantage point, it was easy reading those big brown eyes: “Where am I? What is this place?” That was the evening’s turned point. Once located – centered – she let herself go.

On “Real Love” next, she air-guitared the opening riff in Prince-like fashion – outsized talent born for the stage. When the audience sang the first two verses, she teared up, and continued to do so throughout the evening, moved at the congregation her career’s birthed. And the moves on that gal worked the room into a Beatles frenzy before the first costume change at the 30-minute mark. “Can’t Hold Me” felt as big as Broadway. If MJB didn’t live every word of every song, then you be the one to say it to her face.

By “I’m Not Gonna Cry,” MJB sang harmony for the audience, then worked her voice in a manner I’ve never witnessed from any female vocalist. She bent, twisted, swiveled, crouched, and contorted as if she couldn’t sing enough – like she was trying to get it all out of her and could only keep yanking at it, the magician pulling scarves out of his top hat. On “No Pain,” she pushed, pushed, pushed the sky so hard you’d have thought she was Ray Lewis. The women behind me chanted, “Go Mary, go Mary, go Mary.”

“I’ve had a good time, Austin,” she announced before the main set closer (“Just Fine”) and sole encore (“Be Without You”), appreciation as genuine as the effort she put into the performance. By then I was in a state of total disbelief.

Before the show I’d met Moody booker Colleen Fischer, who swore strident allegiance to bringing R&B to the venue. Walking to the car afterward, I thought of her and another name flashed behind my eyes: Candi Staton. Bucket lists, by nature, rarely stay empty.

Nevertheless, in summing up what happened at the Moody on Wednesday, I’m reminded of Kurtz at the end of Heart of Darkness and Orson Welles in the last frames of Citizen Kane, croaking their last words. I imagine myself at the end of my life recalling Mary J. Blige in a word: Unbelievable.