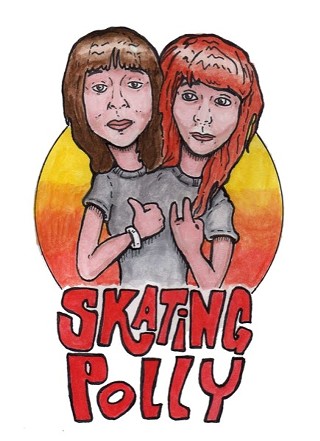 Showcasing for the first time this year at South by Southwest, charismatic punk girl duo Skating Polly arrives from our northern neighbor Oklahoma, winning fans at all points. I caught up with them as they tour the Midwest with Broncho.

Kelli Mayo, 12, and Peyton Bighorse, 17, are Skating Polly. Destiny brought together the dyad, which trades off between guitar and drums, when Mayo’s dad married Bighorse’s mom five years ago.

“The cool thing about the Oklahoma music scene is that people seem really supportive of each other,” reflects Bighorse. “There doesn’t seem to be a lot of jealousy. All the artists want to see good things happen for each other. Bigger bands like the Flaming Lips help out bands just getting started.”

“Once Peyton moved in, we started writing songs together, and on Halloween night 2009 we played our first ‘band jam’ type of thing for our family. From that moment, we decided to start a band,” says Mayo.

Skating Polly’s new disc, Lost Wonderfuls, produced by X’s Exene Cervenka, comes out this spring. Most of the songs were mixed by Kliph Scurlock from the Flaming Lips.

“We met Exene while she was playing at this old punk club in Oklahoma City called the Conservatory,” explains Mayo. “We introduced ourselves and bombarded her with questions and told her all about our band. We started sending her some demos and one day she emailed us offering to produce our next record.

“She’s a storybook and can just go on and on with cool tales. She’s really creative. She’s one of those people who can take something commonly overlooked and turn it into art. She devotes her whole life to art.”

Working with a genre founder has made Bighorse examine her definition of being punk.

“It’s a sense of self, if that makes sense. It’s about not really caring what people think of you and having your own identity. Anything that’s really honest and not phony can be punk.

“Our generation’s different because it has access to endless knowledge through technology,” continues Bighorse. “Unlike past generations, we can use this to find all the music we want. You can put ‘German funkadelic bands’ into Google and find more than enough music to satisfy your curiosity.

“I think a negative thing about our generation’s music is that the best music is not the most popular. The most popular stuff usually comes from some businessman’s idea of what will make money instead of from great artists.”

Skating Polly showcases SXSW at Vahalla on Friday, March 15. They also can be found at the Proper Nang pre-SX party on Saturday, March 9, at Maria’s Taco Xpress and day parties like the Youngbloods Proper Nang March 14 at the Continental Club Gallery.