Not old enough to drink, but veteran enough to showcase 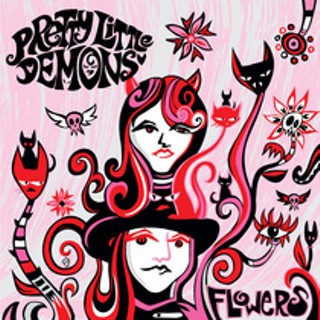 This year, South by Southwest notches another first: the Youngbloods Showcase, an all-ages bill featuring U21 acts from around the globe on Saturday, March 16, at the Palm Door, 8pm-2am.

Meet the singer for one of the showcasers, Lydia Night of Pretty Little Demons from Santa Monica, Calif. Her journey here began at age 6 when she saw the Donnas live.

“I saw that girl musicians could rock and I wanted to do the same thing,” she enthuses. “My first performance with my old band was at McCabe’s Guitar Shop in Santa Monica when I was 7. We played three songs I had written and it lasted three minutes and 39 seconds.”

Pretty Little Demons configures as a twopiece girl group, with Night on vocals and guitar and Marlhy Murphy on drums. They met the way a lot of young bands do these days, at band camp, and today they’re one of the few young acts playing originals, which helped land them at SXSW.

“Young bands aren’t introduced to the writing side of things,” ventures Night. “I was lucky because my first guitar teacher had me writing songs at 6, so it became natural to me. It never crossed my mind to play only covers.”

One of the singer’s musical inspirations will be at SXSW this year, Amanda Palmer.

“It’s Palmer’s stage presence. She tells a story and really connects with her lyrics.”

“We raised the money on Kickstarter and recorded it at Hicksville Recording Studio in Joshua Tree,” explains Night. “Ethan Allen produced it and we loved him. It only took three days and we recorded seven songs. Marlhy plays drums and we took turns on the bass and keys tracks. We left off one song for a vinyl single that will come out this summer.”

Not only does Southern California roots-punk band X still inspire future generations, the quartet’s Exene Cervenka will sit in with Night and Murphy for their album release party March 3 at Amoeba Records in Hollywood.

“Exene is friends with my dad [Morgan Higby Night] and comes over to the house every Sunday to do her radio show, Exene World, on my dad’s station, Devil’s Night Radio, an internet station on iTunes. Exene is a rock & roll goddess and a huge inspiration to me. I’m so excited to sing with her at our record release show.”

Brett Anderson, singer for the Donnas, will also be singing with Pretty Little Demons at Amoeba, bringing Night’s musical inspirations together. Who know who she’ll hook up with musically at SXSW.

“I hope to meet a lot of musicians and see a lot of panels. It will be a great experience for the two of us to play that many shows in a short amount of time.”

Beyond SXSW, “We’re just going to see where music takes us. We’re trying to stay in the moment and enjoy our childhood.”

Catch Pretty Little Demons during my Proper Nang Night at Maria’s Taco Xpress on March 9, as well as the Proper Nang Day Party on March 14 at the Continental Club Gallery, and, of course, the band’s showcase March 16 at the Palm Door.