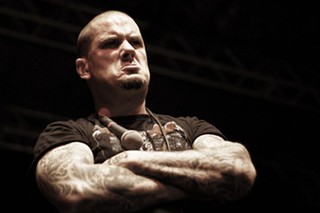 Phil Anselmo raids the tombs and blasts the rafters: The metal icon brings his new band to his new film and music fest, Housecore Horror

Austin's newest film and music gathering, the Housecore Horror Film and Metal Festival, may not be until October, but it erupted out of the tomb today with a big announcement: Texas metal legend and festival co-founder Philip H. Anselmo will be bringing his new project, Philip H. Anselmo and the Illegals, to headline the music stage.

The inaugural three day festival will devour the Emo's East complex Oct. 25-27, and will give Austin the dedicated horror and metal gatherings it's lacked so far.

We've been following the fest's development since SXSW 2012, when co-founders Corey Mitchell of Bloodydisgusting.com and metal icon Anselmo (Down, Arson Anthem and, of course, Texas metal pioneers Pantera) announced their plans.

From chatting with Mitchell over the last year, we knew that super-controversial German horror director Jörg Buttgereit (Nekromantik, Nekromantik 2, Schramm) and DIY legend Jim VanBebber (The Manson Family, Deadbeat at Dawn) will attend the film programming, plus Down would be headlining one night of the music stage. Now Housecore has added NoLa sludge dispensers Crowbar and Phil's new extreme metal outfit in their Lone Star debut. We got our first taste of their bitter eruptions earlier this year with War of the Gargantuas split EP, featuring Anselmo's new crew and his Housecore Records labelmates Warbeast. Quick synopsis: It's brutal, and let's just say we'll be primed for Anselmo's upcoming first full length solo release, Walk Through Exits Only.

Who else will be coming? Let's just say there are some big names of both horror cinema and hard music lurking, creeper-style, in the wings.

For anyone interested in entering their own film, the festival is taking submissions now via www.withoutabox.com. The early entry deadline is March 30. As the festival says, "Feature length or short films, big budget or shot on a cell phone – if it’s well made, compelling, and chilling, Anselmo and Mitchell are ready to select it."

The duo are planning to make this a real event, not just a few screenings, so they are currently planning a haunted corridor (no surprise, since Anselmo is an original part of the legendary House of Shock Halloween attraction in New Orleans.) There will also be vendors, horror artists, gore-lesque performers, smaller screening rooms and parties, natch.

Housecore Horror Film and Metal Festival runs Oct. 25-27. The first round of three day passes are on sale now for $149. Tickets, plus vendor and submission info, are available now at www.housecorehorrorfilmfestival.com.