The story begins a couple of years ago when Crowley was a barista at Strange Brew – before it became a music venue. Owner Scott Ward asked her to start booking shows here and there on the weekends.

“I would play there too and Scott had always talked about opening a music venue that I would book,” she recalls. “So we started booking and it snow balled. Scott’s really a music lover and a supporter of musicians. As we started getting better and better acts the scene has grown.”

Even the Glenn Miller Orchestra played there last week at a big ticket price with two sold-out shows.

“We had a great little room at first and then we saw we could have bigger shows,” continues Crowley. “Originally the room only held about 60 people. So we tore down a wall and now it feels like a real venue with a bar. We built it so we could grow into it.”

Crowley’s played music since she was a little girl. Her mother was a piano teacher and music filled their house.

“I realized I could sing when I was 6 years old living in Massachusetts. I would stand at the piano with my mom and sing my songs. Later, we moved to Connecticut. At around 9, I started playing guitar and going to lounges with my mom. She’d invite me to play onstage.

“Then I started doing talent shows. I continued to do solo stuff with my mom, plus I’d do Battle of the Bands. Then I moved to Los Angeles when I was 19. That’s really when I started singing out.

“Music made me feel like a whole person, like who I was supposed to be when I was singing.

“And it wasn’t until I moved to Austin that what I was doing made sense. I never felt like I fit in other places. When I came here the first time, I felt like people got me and understood what I was trying to do. Being in Austin allowed me to investigate my music more. I’ve found the parts of me that were interested in country music and Americana music.

“Being in Austin helped me relax and be myself.”

Crowley’s Wednesday night residency pairs her with boyfriend Will Knack.

“It’s given me an opportunity to do new songs and old songs,” she enthuses. “It’s just great. It’s giving me a chance to get re-inspired. Will and I are also writing songs together.”

Crowley’s hoping to make a new album later this year for a 2014 release.

“Going from a full-time musician to a full-time barista for a while was a huge adjustment. I actually wound up enjoying it and it got me out of the house every day during a hard time in my life. While my music suffered during that time, it ended up being easier than I thought.”

No longer a barista, Crowley says, “Booking Strange Brew is easier for me because it’s part-time and now I get to spend more time on music. It’s a little weird because I now work for other people’s music, but that’s also been such a nice surprise. It’s inspiring to play every night and to see how other people are realizing their dreams.

“It’s really cool to be part of that.”

“Write a lot,” recommends Crowley. “Play with a lot of different people. Do shows. Practice. Be the best musician that you can be. Get out there and be part of the scene, like the scene that the teen musicians have created at Maria’s for the Proper Nang Night.

“And stay away from drugs and drinking because that can become a distraction. Stay positive and work hard.” 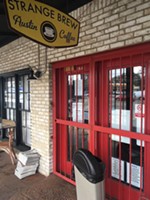 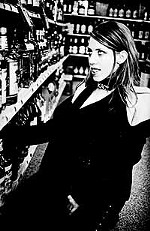