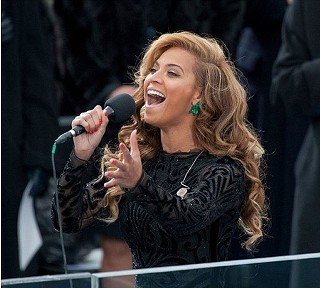 Sure was nice of Beyonce to share the inauguration with President Barack Obama on Monday.

I don’t know if it says something about the people I follow on Twitter or if it’s Queen Bey’s majesty, but the healthy tweet activity sustained throughout the speeches and poetry readings exploded during the singer’s star-spangled performance with the United States Marine Band.

Blond tresses flowing, ever the statuesque picture of class, she belted the national anthem so passionately that it left me hungry for apple pie and Joe Biden with the biggest schoolboy smile ever. America loves Beyonce, and I’d like to think she loves us back.

Soon after the performance, a Marine Corps bandmember let it leak that Beyonce allegedly mouthed along to a track pre-recorded on Sunday. This, of course, sent the public into a frenzy of confusion. Was lip-syncing our national anthem in front of the president treason? Is she going to do this at the Super Bowl? Is there anything to believe in anymore?

Obviously, this isn’t some rare, isolated case. For big, televised moments like the inauguration, producers and performers don’t want to risk bobbling a once-in-a-lifetime moment. Aretha Franklin, who performed at Obama’s first swearing in, came forward in Bey’s support by explaining the effects that cold temperatures can have on pipes, all the while making sure we knew that her own performance of “My Country ’Tis of Thee” was live.

Seems it isn’t Beyonce they were protecting as much as the austerity of the event itself.

I could rant on the uncountable ways that Beyonce is the only perfect specimen of a human being and how Kelly Clarkson doesn’t deserve to stand within 100 feet of her, but I won’t. What I will say is that after watching video of the performance many times, her precision if she did lip-sync (she’s remained silent on the subject) was so on point that it’s shocking – a true testament to her reputation as a perfectionist.

Lip-syncing remains a larger part of live performance than anyone would like to admit, but it doesn’t mean it’s always excusable. Here are five lip-syncing gaffes that should make you angry.

When her Circus tour hit Australia, fans were so put off by the show’s lip-syncing farce that lawmakers considered putting a disclaimer on such future promotions. Spears used to get a pass because of her high-energy acrobatics, but the X-Factor judge’s half-hearted, sedated dance moves have stripped her of the right to pre-record.

Talk about foot-in-mouth. Sure, larger than life divas make easy targets, but Carey has gone on record saying that lip-syncing should only be done with good reason. That’s what makes her fall so sweet and infuriating. On a Good Morning America performance promoting 2008’s E=MC2, the singer’s backing vocals began to malfunction on “Touch My Body.” To alert the sound engineer, Carey peppered in “Stop singing my part now, baby,” to the lyrics, unwinding the performance to an awkward finish.

Oh, 50. Your bulletproof vest was no match for a careless DJ. At the 2007 BET awards, DJ Whoo Kidd played the wrong version of 50’s “Amusement Park,” adding in unexpected breaks and additional vocals that left the rapper lost. Literally. He started wandering through the crowd in an even more cringe-worthy fashion until they cut the song short. Why he felt the need to lip-sync one of the slowest flows of all time, I have no idea. I could’ve rapped this.

A two-octave range isn’t a lot to ask for, but the pressures of the Saturday Night Live stage were too much for the younger Simpson. In the fateful 2004 show, the singer performed hit song “Pieces of Me” without a hitch, but when she came back for seconds, the control room rolled the same track with her vocals attached. While the band made its best efforts to save the song, an obviously embarrassed Simpson started doing some twitchy polka jig before exiting the stage. To add insult to injury, she lied about it, blaming her band in the show’s final moments. Later, she would lay blame acid reflux.

Whose heart didn’t melt when pigtailed 9-year-old Lin Miaoke sang “Ode to the Motherland” at the 2008 Olympic opening ceremonies? The tiny, beaming girl in a red dress delivered the most emotional performances of the night. It was also faked. Members of the Chinese Communist leadership found Miaoke’s voice unacceptable, and opted for a version done by 7-year-old Yang Peiyi. Unfortunately, Peiyi wasn’t deemed cute enough to represent the People’s Republic of China, so they spliced her voice over Miaoke’s muted performance in one of the most public and insulting forms of manipulation. That’s a lot of therapy waiting the two young performers.