And her homegrown curve-ball edge to songwriting 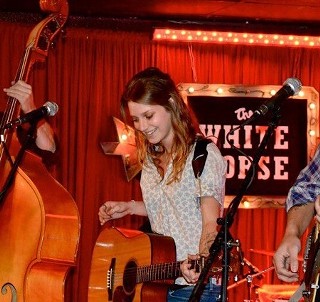 Releasing an album or recording remains a milestone for any musician. Tonight at the White Horse, 10pm, Carson McHone oversees her first EP. I booked the young local for a U18 Threadgill’s series several summers back, and found myself utterly charmed by the teen songwriter citing onetime local Ana Egge as an inspiration.

Seriously, that’s what got my attention. I expected Joni Mitchell or Lucinda Williams or maybe Kathleen Edwards to be name-checked, but no, she said Ana Egge. That’s the kind of curve-ball edge found on Carson McHone’s self-titled EP, songs such as “Pale Blues” resonating with the confidence of a veteran. Call it a direct result of growing up in Austin’s music-saturated atmosphere.

“Ana Egge writes those deep, dark songs,” explains McHone. “I love that stuff. One song in particular, ‘Fairest of Them All,’ really stayed with me. The lyrics were just so haunting. I heard Slaid Cleaves cover it. He did a melodically darker version and I just had to sing it like that.

“There’s nothing like a sad song, but Ana Egge can kill that upbeat honky-tonk stuff too. A very diverse songwriter.

“Townes [Van Zandt] is probably my favorite when it comes to lyrics. He makes you work. It’s like a poetry exercise reading his verse. He writes in so many different rhyme patterns and meter.

“I’ve been listening to a lot of blues lately too – Mance Lipscomb, Lightnin Hopkins, R.L. Burnside, Howlin’ Wolf. It just moves you in a different way. The blues just want to get it out of you, whatever it is you’re feeling in the moment. It’s not necessarily about being calculated and precise, but honest.

“Honest is what I am when I write and play and sing, so listening to those players inspires me. It’s this circle that feeds itself, listening to something raw and honest and in turn getting satisfaction out of living and writing in that same way. Inspiring that same drive and feeling in others.”

The six songs on McHone’s EP were written over the last 18 months, a time of reckoning as she went off to Hendrix College in Arkansas. She gave it the old liberal arts college try for a year and a half before giving in to her muse. Returning to Austin brought with it the challenge to actually do what she’d only dreamed about: pursuing music.

“I needed to work out in the world, get a taste of something else, live on my own. I came home, started waiting tables downtown, spent about a year getting lost. Then, when it was time, I went looking for myself. I found myself again through song. In the end, the thing that brings you back to reality is what you grab onto with true passion and respect. That’s what writing songs and playing music was for me.

“The White Horse is great to play because the crowd is so diverse, and yet it’s so loyal. The folks that frequent that bar are from all different walks of life, young and old, and there’s still a sense of community. It’s cool to have a crowd that trusts you will deliver because they trust the bar that books you.

“And it’s really fun to recognize why these different people enjoy the music. Some come to dance, others to drink and get rowdy with you, others to listen closely to your lyrics, others to listen to your band members, because lots of times the folks in the audience are also musicians.

“We all end up learning from each other.” 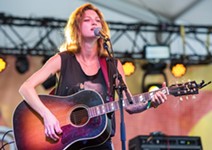