Historic ‘Home of the Blues’ will vacate Fifth Street

Antone’s will be changing locations this spring, confirmed spokesman Frank Hendrix. In late March, the historic venue vacates the building it’s held at Fifth and Lavaca since 1997 and will likely move into the lower level of a downtown hotel. Hendrix says Antone’s is considering offers from two different hotels as well as a property on E. Riverside.

“We’ve got several good things in the works,” he reported by phone, “but nothing’s final yet.”

Hendrix, also proprietor of Emo’s, took over Antone’s operation in 2010. He says Antone's will thrive in a location with better parking and visibility.

You can’t refer to Austin’s live music scene without mentioning Antone’s and its late namesake Clifford Antone. Beginning in 1975 at Sixth and Brazos, Antone's grounded the blues in this city and grew into a global brand. In its 37 years, the club has moved three times, setting up shop on Anderson Lane and also on Guadalupe before finally landing in the warehouse district in the late Nineties.

Filling the Fifth St. void will be a new venue called Project Infest, which formerly operated as a concert, art, and community space in a Los Angeles warehouse. They held events like dodgeball tournaments with bands played behind a net, and an art night where they built an apocalyptic movie set with live models for people to paint on. They were also known as a staple punk rock venue.

Project Infest made its local debut earlier this month during Free Week when they helped sponsor the Leftover Crack, Krum Bums show at Beauty Ballroom. They plan to use the Antone’s location as a multipurpose music/art collective space. 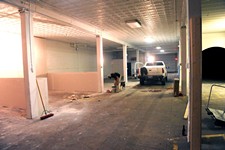 Blue Monday
Antone’s anniversary winds up, not down