Megan James on social media: “It’s all of it” 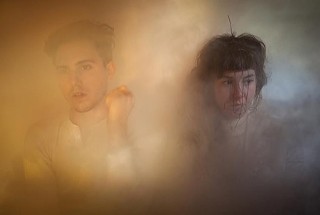 Canadian duo Purity Ring made its debut by posting the ethereal and churning “Ungirthed” to Tumblr in Jan. 2011. The message was simple: “We are birthed.” 2012 LP Shrines set them into whirlwind touring, and as production guru Corin Roddick and vocalist/lyricist Megan James begin a winter trek, they stop at a sold-out Mohawk Tuesday, Jan, 22.

Megan James: Pretty good. We’re on the second day, so no problems yet. We’ve just gone through New Jersey on the way to New York.

AC: What are your expectations for this tour? Most of the dates are sold out.

MJ: I’m pretty excited about touring with our friends Young Magic, who are lovely people and music. I think it’ll be nice to be on the road with them. I’m happy to be driving south. It’s already gotten warmer. We’ve done a lot with touring. Based on that, I think we’ve got a better handle on it than we have in the past. I feel pretty good about it.

MJ: Just with who you bring with you and how you develop the schedule day to day – where we’re stopping, where to find coffee. That’s really hard to find sometimes. There are a few things that need to be in place to make things go smoothly. I’ve been reading a lot on tour, which is nice.

AC: What are you reading?

MJ: It’s called The Magus by John Fowles. It’s pretty long, so I’m hoping it will last me a few months, but I doubt it.

AC: You released “Ungirthed” on your Tumblr a year and a half before Shrines was released. What effect do you think the hype that built around that track had when the album was finally released?

MJ: That song was a turning point for the next 10 years of my life. Neither of us expected what happened with that song to happen. I can’t really say what that song did for the record, but it was definitely the instigator. It was the reason we did any of it. That being said, I think I have a different kind of appreciation for that song, but each of the songs we released has the same sort of feedback from the Internet. I think it’s all pretty similar if you were to think of all the feedback that we’ve gotten from each song and the album as a whole. I feel it’s all pretty equal across the board.

AC: You’ve made a lot of important announcements using social media. The release of “Ungirthed,” the Shrines album art, a few more tracks before the album. What role do you think social media has played in your career?

MJ: It’s all of it. We didn’t tour once before we released the song. We didn’t even write songs before we released that song. It was the first one. At the time it was the epitome of the Internet doing all the work for you. It’s been a lot of work since that happened because it made it possible for us to tour and be successful at this, but it’s entirely social media. It’s nothing else. You can release a song that you think people will like, but the reason they’ve heard it is because of social media. It’s not because we pushed it on anyone. It just kind of trickles.

AC: When you played South by Southwest last year you played the Pitchfork showcase at the Central Presbyterian Church, which gave your set this creepy, jarring resonance. Now that you’ve toured, what are you favorite kind of spaces to perform in?

MJ: I’m glad that you saw that. Actually, churches are my favorite. It seems like it’s somewhat out of place for a band like us to play. Usually you see folk bands or something like that. We’ve played in a few different churches and I always feel so lucky when we get the chance. They’re the best shows, I think.

AC: What are those lighted orbs that Corin plays live?

MJ: We just call them the instrument or the lights. Every tour we kind of tweak it, but he built it. Each light represents a note in each song. The first version that we had of that were these metal pipes with the orbs on the end, but it was all connected and a bunch of the other ones would go off all at the same time, so it was hard to control.

AC: How important are visuals to a Purity Ring set? There was a pretty elaborate set up.

MJ: It’s difficult for an electronic band because the way we record is not interesting to watch at all. It’s so boring, no one would watch that for an hour. It’s extremely important to have some visual aesthetics that isn’t anything to do with how you write – just so it can be a spectacle. It should be something people appreciate outside of the music, but also in conjunction with the music. We’ve gone to great lengths to make sure that there is something to look at, and that the set will evolve and not be too long. We hope that we’re making everyone else comfortable, which is a way to connect with the audience. I think that visuals are half of the importance of a live show.

AC: You and Corin live and work in separate cities. How does that process work?

AC: At what point did you figure out your could Google “Purity Ring” without Christian jewelry coming up first? It used to be difficult to find you guys!

MJ: [Laughs] I actually didn’t know that. It says a lot about what the Internet has done, I guess. I’m glad we’re finally coming up more than actual purity rings. That shows increases in our favor.