An open letter to Robert Plant and other U18 happenings Dear Mr. Plant, Austin’s School of Rock presents a tribute to your band Led Zeppelin this weekend at Red 7. Shows are Friday, Jan. 18, and Saturday, Jan. 19, 7pm. We’ve been studying your music and rehearsing for several months now. Since Led Zeppelin is the Greatest Rock Band of All Time, we’ve learned so much about the beauty and majesty of music.

We’ve even researched your inspirations and learned from the masters the same way you and your bandmates did. We’ve worked very hard, hopefully we will do the material proper justice.

Your Fans,
The students from the School of Rock Led Zeppelin Tribute Show

P.S. Just in case you would like to attend, we have put you on our guest list for both nights

The Youngbloods Acoustic Nang happens this Saturday, Jan. 19, at Strange Brew, 7-9pm. There’s no cover. This U18 show features Ramona Beattie (click the photo gallery here for her special “Next Up” illo), Zach Taylor, Finley Sexton, Harper Starling, Sophie Meadows, me, and out-of-town U18 guests from Lafayette, Louisiana, Naybor's Basement.

Sunday afternoon, Jan. 20, James Mays’ Jam Fest loads into Antone’s beginning at 1pm. The annual fundraiser benefits the Eanes Education Foundation and runs a dozen bands until 5pm. Most were chosen from auditions Mays terms “American Idol-style,” held at West Lake High School. 2013 dawns as the first year Jam Fest itself is a competition. Prizes include a recording session at Flabby Roads Studios and a photo shoot from Way of Light.

Tickets are $3-$5, and each band – Austin Burns, the Bare Feat, Dooms Day December, Electric Silk, the Others, Saving Daylight, Gypsy, Splendor, Suite No. 7, Identity Crisis, and Medusa Cascade – sells tickets to the show. Their sales are part of how the bands are scored in the competition.

“Jam Fest is for a great cause,” declares Residual Kid’s Deven Ivy.

Mays also runs the Band Aid School of Music, which, “teaches the skills to be better people through music. What makes us different is that we focus on helping the musicians play with one another. We build individual, unique bands. Then we try to help them be successful artists and successful in the business of music.”

To keep up with the U18 teen scene regularly, hit Maria’s for Proper Nang Nights. Shows are twice a month on Saturdays, they’re always free, usually benefit HAAM, and always feature a special guest adult band. 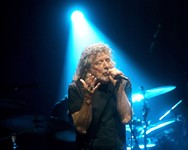