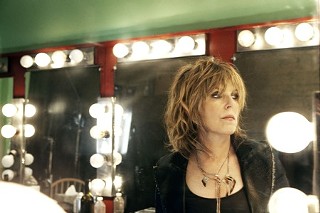 “Hey, it’s Lu! Out here on the road! I’m in Dallas, then coming to Austin.” Those are sweet words from the Grammy-winning singer-songwriter, who once called this town home. Her Paramount Theatre show tomorrow, Wednesday, finds her with Doug Pettibone, the duo configuration recalling her local tenure of the Seventies and Eighties.

Austin Chronicle: Who’s opening your Paramount show, are you having special guests? I saw Walter Salas-Humara with you on YouTube.

Lucinda Williams: He opened for us in Arizona, and the Silos recorded “Changed the Locks,” so Walter sat in with us on that. I’m also excited about a new, younger band out of Alabama, the Kenneth Brian Band, who will be opening the rest of the shows including Austin. He’s amazing. Even though he’s got a young face, he’s an old soul. I’m blown away by his songwriting: the spirit of Lynyrd Skynyrd but the youthfulness of Drive-By Truckers. When you see him, it’s like, ‘What’s not to love’? It’s all there.

AC: What made you choose the stripped-down format of just you with Doug Pettibone?

LW: First and foremost – and economically speaking – a lot of artists are doing this because overhead’s so high. The way the economy is now, even Jackson Browne’s out there doing this.

AC: For you, this sounds like a return to form. You’ve spent most of your career playing solo.

LW: You're right. It’s not like something’s missing, it’s just different. The advantage is, it gives me a chance to play different venues than with a band. Which is exactly what we’ll do in Minneapolis – play this small room called the Dakota where I’m doing four nights. You get intimacy because the rooms are smaller.

AC: I think you’ll find that your longtime fans who remember you like this will be very pleased.

LW: Yeah, they really love it, and we rock out too. We do “Joy” and “Changed the Locks.” Doug goes electric, and I pick up my electric for certain songs. It’s cool because I’m going through the entire catalog. Last night, we did “Abandoned” and I hadn’t done than in ages.

LW: Yes, we’re going in the studio in March. “Bitter Memory” is one that’s going to be featured in that show Nashville. There’s also “Stowaway in Your Heart.” Another is “Something Wicked This Way Comes,” a hellfire and brimstone Southern Gothic thing. We think it might be in Nashville too, because T-Bone Burnet likes it a lot and he’s doing the music. It’s real cool.

Something else cool: Nora Guthrie, Arlo’s sister, reached out several months ago. We met initially at a folk festival in Germany and stayed in touch. She sent me yet another set of Woody Guthrie’s lyrics that had been discovered and didn’t have music to them. She reached out to me about putting some music on them, which I did. It’s called “House of Earth” and came out really good.

At the same time, they found a novel Woody had written but never published, also called House of Earth. So the book is coming out in conjunction with the song. I did that song last night for the second time. The first I played it was at the Woody Guthrie Tribute at the Kennedy Center in DC in October with Donovan and Judy Collins and others.

AC: I’m cheating and asking you a question based on a personal email exchange we had at New Year’s, when I told you I was in love and couldn’t get “Honey Bee” out of my head. You said it still made you hot to sing “Honey Bee.” Do you have to be in love to write a good love song?

LW: Well, you’re generally in one of two places in your life – in love or hurt because the person left. One or the other. I, for one, have always been either with someone in love or in love and not with that person. I can’t really remember a time when I was satisfied on my own. Occasionally, I’ll meet a woman at a party and ask if she’s with anybody and she’ll say, “No, I’m fine.” I always wanted to try to be like that!

The unrequited love songs are – I think – the easiest ones to write, the brokenhearted, sad ones. That’s what most people’s songs are about. The longing and all that. The thing I’ve been pleased with and happy about is writing satisfying, happy love songs.

Which I never did until I met Tom. I had other love songs, but they were tinged with something else. Now I have songs like “Honey Bee” and “Tears of Joy.” And the ones on Blessed, “Sweet Sweet Love.” That’s a new direction for me.

It’s so ridiculous. When I got involved then engaged and married, every time I got interviewed, it was, “This is your happy album.” They went so far as to ask if I would still write songs – “Your fans want to know what will happen to your songwriting?”

Well, for one thing, I’m not “happy” 24-7. And there are other subjects to write about. Since I’ve been so grounded with Tom and not running around all over the place chasing some boy down, I can concentrate on writing about other things, which was what Blessed was. The “Blessed” song, “Born to Be Loved,” “Soldier’s Song.”

AC: I felt Blessed came with a lot of contentment, something I didn’t get from your earlier albums. Most of your previous material has such a yearning to it, then there’s this contentment.

LW: Right, and great art can come out of that. There’s this myth that’s not possible, but I’ve put it to the test and I guarantee I’m more prolific than I’ve ever been. I’m inspired!

This has always been a goal of mine, the challenge to write about other stuff the way Bob Dylan did and still does. Not all personal relationship stuff, not just all about me, me, me. I want to branch out and write about the world, suffering, causes. Like “Masters of War” and “God on Our Side.” Woody Guthrie did it. I wanted to write about something other than unrequited love for a change.

People try to use that excuse of, “Now that I’m all settled down,” or “Now you have money and you’re not struggling anymore,” which I think is total crap. If you’re an artist, you’re an artist. It’s inner turmoil. That’s what drives me. That’s the thing – look around, there’s plenty to be miserable about!

I told somebody in an interview, “Trust me, I’m still miserable!” That’s what they want to hear me say! Look, I love Tom, but that doesn’t mean I don’t have my bad days or feel sad or think about my mother’s death or my brother’s mental illness or my sister’s physical and mental illness or the estrangement of them. Come on.

That was all going on post-West, when I was doing Little Honey. I had a lot of songs still around from when I wrote the West songs. I’d wanted to put them out on a double CD, but Lost Highway didn’t want to do that. It was confusing for people. I was with Tom when Little Honey came out, all these songs that had been written before I was with him.

So now we’re kind of caught up. I always tell people, “There’s only one bad boy song on Blessed, and that was “Buttercup,” written prior to Tom about the guy I was with, an abusive drug addict. He’s the same one in “Jailhouse Tears,” so it’s kind of a bookend.

AC: That reminds me. The one thing I most hear about you is people wondering if you’ll ever write a book about your songs.

LW: I’m sure I will. In the vein of Marianne Faithfull talking about, “I fucked Mick and I fucked Keith. I fucked them all!” [Laughter] 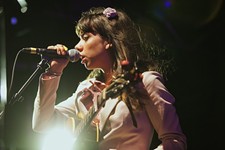 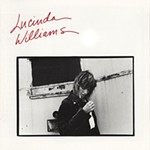