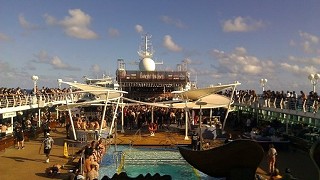 Seldom does my inner Swamp Thing rear its head over shows I can’t attend, but that green-eyed monster jealousy coated me like the Grinch upon seeing the Barge to Hell line-up Austin metallers HeadCrusher thickened in December. Given Behemoth, Rotting Christ, and bucket-lister Grave, I uncharacteristically asked for a full report upon their return.

Face it, you don’t want to hear the gloriously gory details of a show you’d die to see, but the five-day cruise from Miami to the Bahamas, December 3-7, notched one metallurgic behemoth after another: At the Gates, Enslaved, Napalm Death. The list went on and on.

Moreover, there was the small matter of a micro Austin act being invited aboard. In fact, with four of its five members hailing from Colombia and the fifth – my pen pal, or rather email fiend David Coloma – native to Ecuador, HeadCrusher thrashes like Latin America itself: big and bad, hombre. Download the band’s relentless 2012 release, Let the Blood Run, at its website.

We begin modestly with bassist Gustavo Calderon’s Barge highlights, followed tomorrow and Friday by the second two diaries, which arc to the epic. In going back over my correspondence with Coloma, I’d forgotten the offer from his initial email:

“The Best of Barge to Hell”
by Gustavo Calderon

I’d never imagined that such a gigantic ship could house so many metal heads, 40 bands and their gear, enough booze to hold them over a week, and not sink. I was particularly excited to help ease the weight of the cargo by drinking as much beer as I could, leading to many adventures that I’m sure would be nice to remember.

Then again, since the stories worth telling are the ones that probably would send us to jail, and my memories from the trip in general are a bit hazy, I’d like to tell you my top five bands of the cruise in no special order.

Grind-masters extraordinaire. It was just a party. No rules, just kick ass or get yours kicked. Thomas Lindberg proved to be one of the most charismatic and powerful frontmen of the ship. Doing double duty with At the Gates isn’t an easy task, but he delivered.

These German legends do not disappoint. Beginning with the first chord, it was a massive, powerful steamroller worth the bruises and neck pain. Sharing a cab ride with them to the airport made it even more special. Songs worth noting: “Napalm in the Morning,” “Blasphemer,” and “Baptism of Fire.”

They set the bar really high from the start and ended it all with a special performance not likely to be seen again. Their first show was a fast, heavy onslaught, but they took it to a superior level on the second presentation of the week, which consisted of classics like “Toxic Waltz” and guest appearances by Sepultura’s Andreas Kisser and At the Gates/Lock Up’s Thomas Lindberg.

An excellent band from Brazil, Seita was added to the Barge at the same time as HeadCrusher, so of course I immediately went to check them out. Their music is violent and fast, and their live set is just as energetic. I also found out these guys are based in the Netherlands. South American musicians trying to make it on a different continent... We can definitively relate to that!

I was happy to see these guys on board, and made sure to catch both of their sets, never mind the seasickness that tinkered with my body for a minute. After all, I had to make up for missing their Fun Fun Fun Fest presentation last year.

So, after one week of thrashing, drinking extensively, and sleeping very little, I have to confess that I wouldn’t have minded if the boat sank into the seven seas the last day. Barge to Hell was an amazing experience. All the bands were excellent, and the atmosphere was one of unity and metal brotherhood.

Barge to Hell, Part 3
A final metal injection from HeadCrusher