Angry Samoan turned critic gives into his goofier side 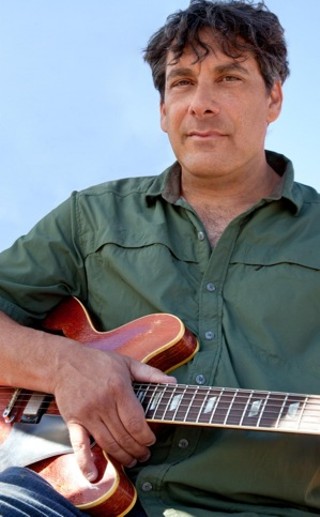 While Gregg Turner remains best known for founding late-Seventies L.A. hardcore punks the Angry Samoans, many fans of a certain vintage were also delighted by his wicked writing for Creem Magazine. With new CD Gregg Turner Plays the Hits in tow, he plays the Sahara Lounge Thursday and the White Swan on Friday.

The new CD features Billy Miller on electric autoharp, much as he played it for the Mars Records 45 of Roky Erickson’s “Starry Eyes” and later with Roky’s band the Aliens. True to the title of his new disc, Turner tackles “Starry Eyes” as well as “Eve of Destruction.”

“[Miller] has an amazing range of sonics,” gushes Turner. “He can strum incredibly beautiful harmonies, and then on a dime dial some freaked-out Jimi Hendrix psychosis.

“Billy’s a musical genius and I feel very fortunate to have him as a resource.”

Austin Chronicle: There’s a long circuitous path from the Angry Samoans to the Blood Drained Cows to the solo album you just put out. What’s behind the new CD?

Gregg Turner: The new CD leans more in the direction of, for lack of a better analogy, Jonathan Richman than previous musical attempts or endeavors. Though I don’t presume to be as funny or self-absorbed as Jonathan, I think the Angry Samoans was hatched and then evolved as a type of wise-ass prank that could only have been conceived and executed in the cracks of punk rock back in the early Eighties.

I’ve always loved Sixties psych-rock from the Elevators to the Sonics to Mouse & the Traps, so the Blood Drained Cows was a New Mexico garage rock expression of this, or at least tried to be. Yet I’ve always had a softer, goofier side that couldn’t find its way into the mix with all of these previous efforts. Plus, I’m just getting too old to posture the swagger of being a “punk” – in any setting!

So the new CD is an amalgam of this kind of material, songs I’ve been been playing in coffee houses over the last decade.

There’s one tune called “The Pharmacist from Walgreens” and another, “I Dreamed I Met Lou Reed,” about a dream where I consulted Lou about an unresolved chorus and he obliged – in the dream, I mean! There’s one called “Santa Fe” where an “insurance salesman of the year” suddenly goes haywire and starts lighting fires. The week I moved to Santa Fe in the early Nineties, there was actually this story in the local paper.

Folks who know me often suffer through long-winded tales I like to tell, so the songs on this new CD are little versions of some of these stories in verse and chorus.

AC: How does having been a critic inform or play into the way you make music? Or does it?

GT: I think I hold myself to a higher standard. Or at least try to. I feel so self-conscious of not wanting to try people’s patience. When I was writing for Creem, this was 1976-1988, I couldn’t stand product or performers that manufactured a pose with nothing to offer beyond the pretense of this. I often felt insulted to have to listen to or endure some idiot’s narcissistic ego trip.

Maybe I just had a bad attitude, but I felt it was incumbent for the performer to sell me on something original or intriguing they had to offer. So, as a rule, in any guise of creative venture I’ve been involved with, my first temperature reading is whether or not what I’m doing could possibly smack of this. Beyond that, it’s gotta communicate something meaningful and personal about me to someone hearing it.

What am I offering that’s different or unusual or musically visceral that hasn’t been done a million times over and over? Is it compelling? Entertaining? What can I convey about myself or what story can I conjure up that captures folks’ imagination. I’m on the defensive here, and rightly so. The ball’s in my court. I need to make my case that I rate the listener’s attention. And then close the deal by hanging on to that attention.

AC: What's up with punk these days? Is it relevant? Flatulent? Meaningful?

GT: I think it’s had its Warhol 15 minutes of fame, a good 15 minutes for sure. Like anything else, when something iconic cannot reinvent itself or loses the context to do so, it becomes as sadly anachronistic as anything else. Though ironically, the tenor of the times these days would appropriately seem to beckon the next round of sonic pathos and antipathy.

There certainly seems to be a resurgence of “old-school” punk rock outfits that apparently can’t throw in the towel and are mucking up the works with now tired cliches and poses. In fact, my Angry Samoans co-founding former bandmate Mike Saunders is still hacking away playing apparently the same or similar set we did over 30 years ago. I give him high marks for tenacity, but who would go see this now? I couldn’t tell you or begin to fathom.

Having said that, I still go out to catch Social Distortion when they come through this neck of the woods. I just have a weakness for Mike Ness’ growling angst. So what do I know.