Alejandro Escovedo reflects on a triumphant 2012 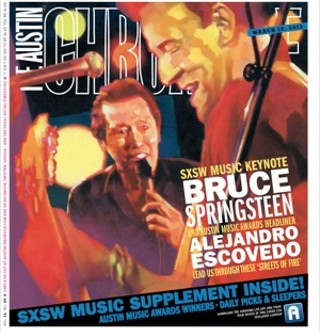 2012 marked yet another stellar year for Alejandro Escovedo, who followed up Bruce Springsteen guest spots during South by Southwest with an acclaimed third collaboration with famed producer Tony Visconti in Big Station. Preparation for a career overview concert at the Moody Theater on Sat., Jan. 12, has given Escovedo much to think about.

Austin’s velvet rocker has invited Joe Ely, Rosie Flores, Jon Dee Graham, Amy Cook, Patricia Vonne, and a host of others to join him for the show, meaning tomorrow’s performance will unfold an atypical show for an atypical performer.

“It’s been an extremely busy year,” admits Escovedo, who turns 62 in January. “We toured for five, six months, home for maybe three weeks. It was too long, really, and took a lot out of us, but it was worth it. We went to Europe and back, did shows here [laughs] and the East Coast. We played some really great shows to TV and finally came home.

“[At the Moody], I have Charlie Sexton as musical director, with Ephraim Owens on trumpet and Elias Haslanger on sax, plus Karla Manzur and Gina Holton on vocals, my band the Sensitive Boys, Mike Flanigin on B-3, Stephen Barber on piano, and Susan Voelz and Brian [Standifer] as the string section. The usual suspects, but we’re trying to tell a story with it and have a festive evening, with things happening out in the lobby.

“Writing songs, I’ve always felt like we could light certain things dramatically and present images that pertain to my songs or what inspires me. In this show, we have a cover section where I do four or five covers, and behind this will be images of people and bands who inspired me along the way.

“When you’ve done so many albums, and you go out and push album after album, it can become like a job. And that’s the last thing I ever wanted from all of this. This year was hard work and it was wonderful, but I really wanted to come home and do something special. And it’s something I’ve wanted to do since we started.

“A while back, I went to Chicago to do a project called United Sounds of America; I was chosen to archive the Austin segment of this show. We did it at the Chicago Symphony, and what I did was tell the history of Austin music beginning with the Bells of Joy all the way to Okkervil River and Ghostland Observatory.

“Lucinda wrote us a letter about her first musical experiences in Austin; we got an interview with the woman who picked up Janis Joplin hitchhiking and took her to Threadgill’s; and there was the woman who led a swing band from the Fifties, Delores & the Bluebonnets.

“So I wanted to do that with my own music and life.”

Escovedo knows about life, which tempered his triumphs this year by dealing the cruel card of death to his longtime friend and SXSW/Austin music scene mainstay Brent Grulke. United by grief, Escovedo and his onetime rock & roll all-stars the True Believers gathered forces to honor their fallen compadre with bittersweet fervor.

“Fuck,” he sighs. “It’s so hard to talk about Brent now. But for Brent and the memory of Brent, the True Believers played – to honor him and his family and all his friends, everybody that loved him.

“But it also really did something for us as a band. We’d taken the band for granted since we splintered in such a weird way, with one guy going his way. We were such a gang-like band that for one guy to leave was like leaving the motorcycle gang. Like being banished.

“So, years later, having had all those wounds heal and seeing each other in a new light and playing those songs again – seeing all those people out in the audience – made us realize how important that band was. And we’re talking about doing it again.

“It feels really good. There’s something weird about a band like the True Believers, because it was such a family, such a gang, that suddenly after all these years of playing solo and evolving as musicians, I’ve found being with my mates Jon Dee and [my brother] Javier and Denny [DeGorio], that’s where I should have been the whole time. So we’ll do it again.

“And we hope to make this Christmas show an annual event.”