‘OK Computer’ for the holidays 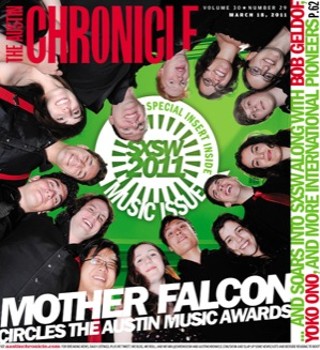 OK Computer, Radiohead’s critically acclaimed third album, was heralded as a conceptual statement about contemporary life. The 1997 disc also happens to be one of Mother Falcon’s very favorite works. On Sat., Dec. 29, Austin’s pop-strung orchestra performs its interpretation of the modern classic at the Scottish Rite Theater.

“Our publisher in Los Angeles commissioned us to interpret and perform OK Computer using our aesthetic and musicianship. We’re creating something that people will be able to connect with.

“It’s been a lot of fun putting the show together and working on Radiohead’s music,” continues Kalifa. “It’s so simple yet so powerful. It’s more important to reinterpret an artist rather than emulate them directly. A lot of songs on OK Computer are about the alienation from culture and society, and insight into how people’s behavior affect others.”

I asked Kalifa about Radiohead’s philosophy of consumerism.

“Radiohead has proven that the Internet is a conduit for the sharing and consumption of art. It’s been innovative the way they’ve used people’s goodwill, trust, respect, and compliments. They’ve proven on a massive scale that the new model of no rules can work. The Internet allows us to communicate as individuals with all the other individuals around the world.”

2013 will find Mother Falcon recording a new album, doing a residency in New York, and traveling more. At least 14 of the group will be traveling, plus their sound engineer. Not your typical band budget.

“Travel will be a challenge with such a large band,” agrees Kalifa. ”But like everything we do, it will be a learning experience. And we’ll get know each other better as friends and musicians.”

“The camp is a way of paying it forward and encouraging the next generation of musicians,” explains Kalifa. “It was an alternative to other music camps. Mother Falcon wants to provide an experience that’s nontraditional and encourages musicians to explore beyond the traditional realm and push their instruments to their limits, creating new and exciting music from that.”

For Astrae Lucia Coneflower, a U18 player from Proper Nang Night regulars Epopeia, camp was essential to her music.

“The Mother Falcon camp encouraged me to believe in myself, and my music. As I learned new techniques on my instrument, wrote songs, and jammed with fellow teenage musicians, I created a whole new layer of passion for playing my cello.

”Mother Falcon’s music motivates me to pick up my instrument and be fearless with it. Hearing their songs sparks realization that I can use the cello I hold in my arms to explain my emotions, tell stories, and even influence other people with the beautiful vibrations of sounds that it produces.”

Named for a TV-censored phrase from Die Hard (“yippee kai yay, mother falcon”), the Austin phenomenon started when cellist Nick Gregg was in high school at Westlake with some of his fellow orchestra mates jamming to composers of the last 300 years. More and more people joined the band and Mother Falcon today numbers some 20 members, depending on the particular performance.

Kalifa acknowledges that can be daunting.

“It’s extremely difficult to organize a band this large. When dealing with people’s schedules you’re also dealing with all sorts of other issues that come up. It’s tough, but totally rewarding. We managed over the last three years to become more and more efficient, but it’s never easy on the day of a show. It can feel like steering the Titanic sometimes, but it’s always exciting.

“No show is ever the same. We always get a chance to have a different experience given who is able to play.”

Don’t miss Mother Falcon’s show on Dec. 29. It will be an original performance like no other this holiday season.