For the Love of Michael Fracasso

They don’t call it the Austin music ‘community’ for nothing 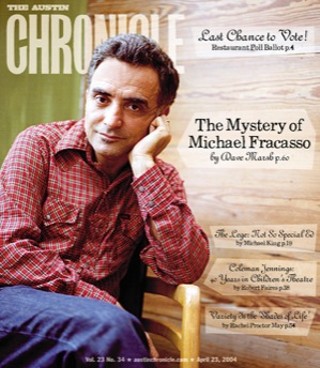 Singer-songwriter Michael Fracasso remains a staple of the Austin sound. Recently, headed home from a tour in Michigan, he was badly injured in a car accident. Patty Griffin & Her Driver put on a sold-out fundraiser for him Saturday at the Continental Club. Sunday, the same pair play for HAAM’s benefit. Griffin’s so-called “Driver” is Robert Plant.

"I was on my way to the airport,” recounts Fracasso of the accident. “Someone had a blowout on the freeway and left their car sitting there. I plowed into it.”

The outlook for his recovery’s good. As we talked, he did physical therapy exercises, which he said were painful. Fracasso expects to be playing again early next year. Discussing music, Fracasso, who hails from Ohio originally, sees differences in his childhood and that of his own children.

“Growing up in Ohio, it was sweet. When I was a kid, we just went outside and played. My kids have appointments to play, but as a teenager I had a hard time finding things that interested me culturally.

“My favorite book is Moby Dick. I was influenced by Bob Dylan, the Eagles, Paul Simon.”

By the time Fracasso finished college he knew music was his path.

“I moved to New York City to throw myself into it,” he enthuses. “One of my favorite shows was Roy Orbison at the Lone Star Cafe. It was magical. Then I read an article in Spin about the music scene in Austin, and about the True Believers, the Butthole Surfers. I remember saving the article and it seemed like a really cool place to move to, so that’s what I did.

“The first thing I noticed about Austin was that it was a great music community. Everyone’s willing to help one another out. As soon as I moved here, that stood out. Musicians are supportive of each other more than any place I’ve ever been. It’s wonderful. You’re able to grow here like nowhere else.”

Fatherhood’s given Fracasso another perspective to write from.

“When I write, it’s never just one character or one voice. Now that I have children, they play into a character I’m writing about in my songs. I see things from their perspective.”

Fracasso's philosophy on life and work remains simple: “Love what you do and pursue it.”

The Proper Nang Nights at Maria's Taco X-press – organized by yours truly – usually benefit Austin’s Health Alliance For Austin Musicians (HAAM). The one a few weeks ago turned an evening of music into a benefit for Fracasso. When help’s needed, Austin musicians indeed come running. We had everyone from Beaver Nelson to the Band of Heathens join us onstage.

For those wanting to contribute further, there’s a Chip In account for Michael Fracasso.