Mountain Goats’ singer on California, teenagers, and the devil

John Darnielle’s a man of words. From his song lyrics to the winding, infinitely referential interviews he's known for, the 45-year-old singer-songwriter-guitarist remains one of the few people in indie rock that deserves his own publishing imprint. We spoke to Darnielle in advance of his trio the Mountain Goats appearing tonight at Emo's East.

Austin Chronicle: Are you ever afraid you might forget how to write songs?

John Darnielle: No, people have romantic ideas about songcraft, like you're going to channel spirits, but it’s a craft. It’s a practice. If you play baseball and you’re a good hitter, your muscles might get weaker over time, but you’re not going to forget how to hit the ball.

I could put Hank Aaron out in the field right now, and he might not beat the throw to first, but I bet anything he could put wood on the ball.

AC: Let's talk about the devil and the Bible.

JD: The devil actually isn’t in the Bible too much. The Bible has very little to say about the devil. There’s a great story though, where the devil’s going around offering Jesus stuff. If you like stories, your favorite character in that story has to be the devil. Just the confidence of knowing who the son of God is and trying to offer him stuff.

The crazy thing is, Jesus is actually tempted and you wonder where that temptation comes from given he’s aware that he will eventually receive all. It’s one of the more human-sounding stories in the Bible.

AC: You’ve lived in plenty of places. Where do you feel home?

JD: People say that, but I really haven’t lived in too many places. When I first left California, I felt like I’d lived in less places than anybody I knew. I was born in Indiana, then I lived in California for 18 years, then Portland for a year, then California for another 10, and then Iowa, and then North Carolina.

So that’s really only four states. But I’m never leaving Durham. This is my favorite place ever.

AC: I saw you in L.A. at the El Rey a year ago, and you talked about that like it was sort of a homecoming. Does California still feel that way to you?

JD: Sure, but the topographical nature of California is such that I think everybody feels like they’re coming home there – whether they lived there or not. It’s got this amazing end-of-the-world feel to it. The final stop. That’s what a sunset is. It’s where I was a teenager and teenage years have deeply rooted feelings. When you go back, you’re in touch with an ostensibly more innocent self.

JD: Oh I think the world does. That’s the big shift that takes place in poetry. In the 19th century, there was a huge idealization of the child. That idealization passed towards the teenage years in the Fifties, and I think that idea persists to this day. You see people turning 25 or 26 lamenting the fact that they're getting “old.”

Which is an affectation. You lament coming into possession of responsibility. 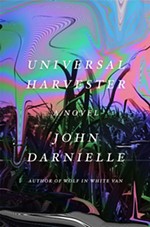