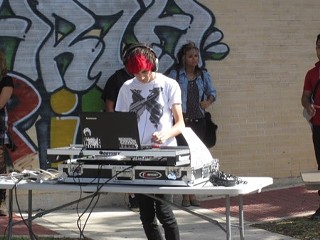 “It sounded right for the stage once I started performing,” reasons Taylor.

He made the leap from floor to stage after witnessing Flux Pavilion and Cookie Monster during a South by Southwest showcase at the Millennium Youth Entertainment Complex in March.

“I saw the energy being brought to the crowd and how much fun they were having up in the decks,” recalls the local mixmaster. “I thought, ‘Wow, this is something that I want to do.’”

DJ or musician? He considers himself a DJ, but he’s not your sister’s DJ. This is “electronic dance music, progressive house.” He spends hours mixing a song and finds courage in music.

“It makes me feel like I can be myself and not be afraid of anything,” he insists, “Don’t let anyone tell you that you can not do this. Don't let anyone get in your way. You can do it. It takes a lot of personal devotion."

Flaic uses a Mixtrack Pro – two turntables and a mixer – but notes: “Making a song is a process that’s difficult to explain. What I mix correlates with what is going on in my life. Most of the songs I’ve mixed so far reflect me feeling energetic.

“Lately, when I’m mixing, I feel like nothing can stop me. Ever since I started going to shows, I saw the energy that this kind of music gives. It makes you want to dance. It gives you a good feeling, like you want to have the greatest time for your life.

The bottom line for Taylor remains the perspective of those who stand where he once stood – in front of the stage.

“I want to give people good feelings and share the power of music together. When I play the music, I want people to sit back and let the music overtake them. I want them to experience the music without a bias. I want the audience to take in the music with all of their senses.”