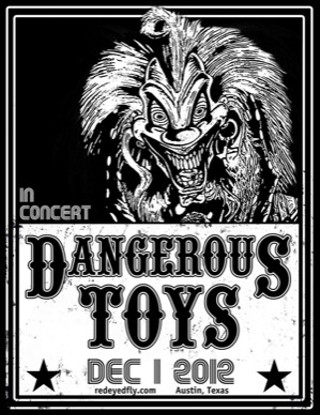 “The line-up is exactly the same as last year, and has been for looooong time!” Jason McMaster throws down the gauntlet for the Dangerous Toys reunion at Red Eyed Fly Saturday. “Mark Geary, drums. Mike Watson, bass. Scott Dalhover, guitar – all original since 1987 – and last, but not least, Paul Lidel on guitar since 1994.” Plus McMaster, natch.

It’s become an annual ritual in Austin, as bands from the Toys to Paul Ray & the Cobras reunite for their fans in the warm glow of the holidays. As leader of the first Austin hard rock band to both dent the charts and get major play on MTV in the late Eighties and early Nineties, McMaster doesn’t just see this as another show or even another reunion.

“I feel like this is a reminder to ourselves as much as to the world that time is short and you gotta keep yourself alive for the right reasons,” he offers. “This is a good reason. The fact that the season is for giving is good as well. Getting the old gang back together and the theory that we never even broke up is important to remind all.

“Retro is popular. Our early fans are on the couch, and their kids are in the front row at our shows.”

He continues, on a roll now.

“Seeing people react to a particular song or sing along every word is the best feeling a band or a fan can have at the same time in a live performance. I really like singing the songs that got us there. Why would we not play the songs that the fans want to hear? It's about them, and we love delivering those cherished moments in time.”

Yet these days, doesn’t a band such as Dangerous Toys – with a quarter-century under its belt – get labeled as a (gulp) legacy act?

“Definitely and then arguably,” parses McMaster. “VH1 Classic plays our videos next to Judas Priest and Motley Crue, like they were meant to be played – in a row. Who are we to argue that? I call it ‘vintage’ and ‘classic rock,’ which sounds good to me, but it makes you sound like you're about to fall apart.”

“I don’t see that happening!”

The Ageless Climate of the Rock Star
Jason McMaster of Dangerous Toys: “I Don’t Regret Anything”