Steve Winwood's Back in the High Life 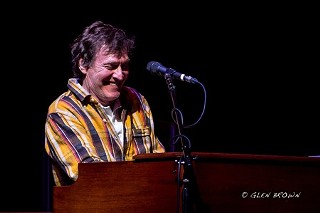 When it comes to British jam bands, the conversation begins and ends with Traffic. Sunday night, the band’s driving force – Steve Winwood – wore that crown proudly at the Moody Theater.

Accompanied by a fourpiece backing band dominated by drummer Richard Bailey and a conga player, the still youthful singer/organist/guitarist took a trip through his more-than-40-year career with mischievous spirit.

Opening with the Spencer Davis Group’s “I’m A Man,” a hit when he was still in his teens, Winwood, 64, signaled it was going to an evening heavy on the classics, or “vintage music” as he called it. Thus we were treated to a dreamy rendition of Blind Faith’s “Can’t Find My Way Home” and several tunes from his Traffic days, including an inspired mashup of “Low Spark of High Heeled Boys” and “Empty Pages.”

Over the course of nearly two hours, the band took flight on songs like “Light Up or Leave Me Alone,” a nod to the late Jim Capaldi, who originally sang the Traffic number. Paul Booth deserves special mention for his multi-instrument ability. He played several wind instruments with aplomb and took over the keyboards when Winwood strapped on a guitar, as he did on the encore “Dear Mr. Fantasy.”

The 2003 Austin City Limits Music Festival was the last time Winwood visited Austin, so the nearly sold-out Moody was raucous and appreciative. Some might have been disappointed Winwood didn’t reach for songs from his solo career beyond “Back in the High Life Again” and “Higher Love,” but they were very much in the minority.

Funky beats, exceptional melodies, and their associated memories were all at a heavenly peak. The ACL Live at the Moody Theater set-list, 11.25.12:

Petty/Winwood: From the Cheap Seats
Tom Petty down Selma way