Jon Langford, Still Punk After All These Years 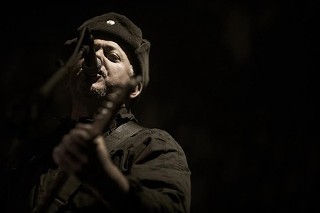 Jon Langford remains an Austin regular, his paintings long a staple at the Yard Dog on South Congress. He’s also a founding member of first wave UK roots-punks the Mekons. While an acute and ingenious musician and artist, Langford's a resplendent storyteller from the seaport town of Newport, Wales, the subject of many of his lyrics.

“Even though Newport was a small grubby town, there were a lot of ideas coming in and out, and a lot going on. Joe Strummer lived there for a while before he joined the Clash. Strummer said it was the first place he’d ever heard reggae music.

“When I was growing up, I was influenced by Irish music and got into angry rebel songs.

“Immediately after I went to the University of Leeds, the Sex Pistols played and I decided I wanted to be in a band rather than make paintings. Years later my most memorable musical experience was playing at the Ryman Auditorium in Nashville where the Grand Ole Opry used to be. It’s the old church of country and western music.”

“The idea that there’s no rules and that you can do whatever you want is still in my music. My main interest is communicating ideas with music. I'm talking about real life rather than a record label following the latest trend.”

Langford's become renowned for his art just as much as his music. Among his collectors is latest Austin resident and rock icon Robert Plant.

“People call folk art ‘outsider art’ and I'm definitely not an outsider. When I came back to art, I was influenced by folk art. My art tries to bridge a gap between the music world and the art world. I like kicking down the wall between art and music.

“I really like making paintings from old country and western publicity photos. I find those images poignant and I like how optimistic they look. It's a painting of a moment.

“And you know, it's a weird moment when you're smiling for a publicity photo. You want everyone to like you. Fifty years later, these guys are still up there smiling on the walls in Nashville, layered in nicotine snot, the pictures all torn and faded.

“I got interested in the idea of songs and paintings being similar. Then I did what I call song paintings. There’s an ancient song called ‘The Cuckoo,’ which has come down through folk music and country music. I don't understand the song. I made a bunch of paintings using the song and I like that it’s hard to figure out what it’s about.

“My favorite painting belongs to Tracey Dear from the Waco Brothers called ‘The Unknown Country Cowboy Singer.’ It’s a singer in a plaid shirt. I put a blindfold on him and it’s like a disguise.

“Don’t worry about whether you're being terribly derivative,” Langford advises young musicians. “Play music that means something to you. Think about what you're trying to say. When you’re young and just starting out, you should probably try to change the world.