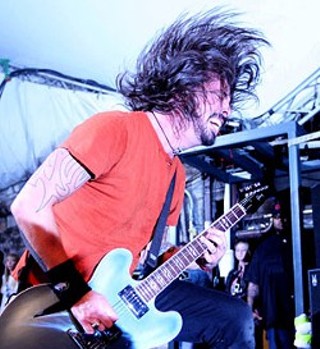 How does a music festival encore netting Bruce Springsteen as its keynote speaker as South by Southwest did in March? They score an equally everyman rocker beloved for both Nirvana and the Foo Fighters. Dave Grohl's confirmed as the Master of Ceremonies for March madness 2013, doing the keynote honors Thursday, Mar. 14, at the Austin Convention Center.

Here's a few recent Grohl sightings, beginning with an unauthorized biography from earlier this year, This Is a Call: The Life and Times of Dave Grohl.

And how about the Grohl-anchored Them Crooked Vultures at the 2009 Austin City Limits Music Festival, or the Foo Fighters headlining ACL in 2008?

No word if Grohl will perform or who with, but then again, the drummer/guitarist/screamer isn't one to be kept from playing is he?