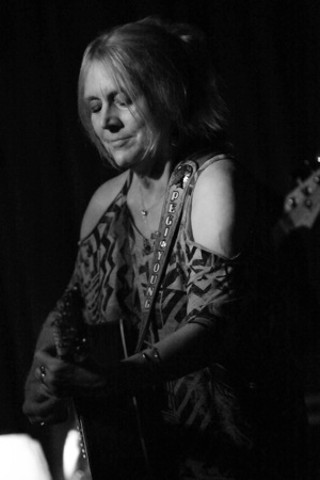 After three albums, Pegi Young remains a relative newcomer. Mention that she’s Neil Young's wife and the light bulbs go on. She sang backup in her husband’s band before releasing a self-titled disc in 2007. Young’s Bracing For Impact, out last winter, finds her confident, inventive, and at times comical. She plays tonight, Wednesday, at Lamberts.

Young was more than just a backup singer, though, and over the years developed relationships with supremely talented musicians who contributed to making her making own music.

When I spoke to her this week, she mentioned being in Memphis where she visited the Stax Museum. Songwriter and keyboard player Spooner Oldham, a member of her touring band the Survivors, played a major part in the Memphis sound of the late Sixties.

“It’s so humbling to have musicians of his caliber with me,” enthuses Young. “I’ve gotten to know some of those artists, like Duck Dunn. He was the bass player on my first professional tour. And Spooner has such a musical legacy. I’ve got this amazing opportunity and it really hit me yesterday in a way that I hadn’t quite felt it before.”

Young's always written songs, but a career following that path lost out to raising kids and co-founding with her husband the Bay Area's Bridge School, which helps physically challenged children. In 2006, Elliot Roberts, Neil’s manager, suggested finally making an album.

“While it wasn’t even my idea initially, I kept it in the back of my mind,” she admits. “We’ve got a great recording studio where I live and, ‘Wouldn’t it be great?’

“But things had to happen in the right time.

“I’d been writing since I was young. I stopped playing for a considerable amount of time while doing other things with our kids, but a series of moments led to getting started again. Once I got started, the band was great and super supportive.”

A standout track on Bracing for Impact is “I Don’t Want to Talk About It,” a song written by Danny Whitten, the tragic figure who played with Neil in Crazy Horse. Popularized by Rod Stewart and recorded by artists as diverse as Everything But the Girl and Andy Williams, it appeared on the Horse’s 1971 debut.

Given Neil’s moving performance of “The Needle and the Damage Done” during his recent Austin City Limits Music Festival appearance, a song he wrote in reaction to Whitten’s fatal drug overdose in 1972, it’s obvious the couple's long gone friend remains with them in spirit.

“When we do it live, I always introduce it as Danny’s song,” says Pegi Young. “To be honest I never even listened to anybody else’s version of it.”