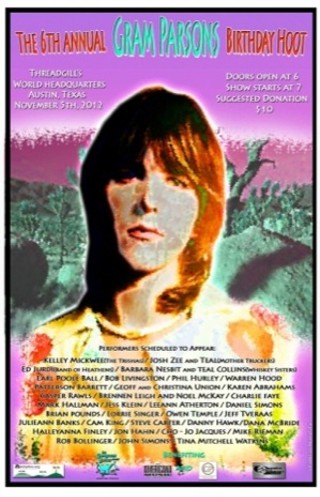 As if Patterson Barrett doesn’t have enough to do with a new CD to promote, When I Was Your Age, he’s hosting the 6th Annual Gram Parsons Birthday Hoot at Threadgill’s World Headquarters tonight, Monday, 7pm. This year’s show benefits both the nonprofit Americana Music Association and the Gram Parsons Foundation.

The singer-songwriter and multi-instrumentalist has been making music in Austin since moving here from upstate New York after recording for the first Jerry Jeff Walker album that included “L.A. Freeway.” On that, he played pedal steel, dobro, and guitar.

Barrett went on to form Partners in Crime with aspiring fellow musicians Buddy Miller and Julie Griffin (later Miller). He was also a core member of the long-running Austin All-Stars at Steamboat in Sixth Street’s earliest days.

“When it was just us and Antone’s,” he chuckles. “Monday nights, there’d be a line waiting to get in and one person could get in if one left.”

It was a shifting group of local musicians that included Bill Browder, Ernie Gammage, Layton dePenning, Tommy Taylor, Jimmy Rose, and many others, a regular gathering “that became a little scene.”

All of which makes him a most appropriate journeyman musician to head the house band at tonight’s 6th Annual Gram Parsons Birthday Hoot. Scheduled performers include members of the Band of Heathens, the Trishas, the Mother Truckers, and the Whiskey Sisters, plus appearances by Earl Poole Ball, Bob Livingston, Warren Hood, Cam King, Julieann Banks, Steve Carter, and quite literally another dozen or so names, all celebrating the cosmic vision of Gram Parsons’ music.

And what about that new CD, When I Was Your Age? First, it has a rather extraordinary lineup that includes the aforementioned Buddy and Julie Miller and Bonnie Bramlett of Delaney & Bonnie fame. Secondly, it’s more of the aptly self-styled “Austin Americana” Barrett so deftly developed for his 2007 solo debut, I Must Be Dreaming. Third, it’s got cleverly Photoshopped album art that posits a youthful Barrett with his lookalike son on the cover. Finally, Barrett plays at Threadgill’s again Nov. 25, and this time the CD grabs the spotlight.

“A publicist friend, Mark Pucci, worked with Bonnie Bramlett when she came to South by Southwest and asked if they could rent equipment to play on, because no one can fly with equipment now,” explains Barrett. “So I ended up driving around Miss Bonnie for the week and we struck up a friendship. When I was in Nashville, I visited her and asked if she would sing on a couple of tracks.

“Seeing her work and sing was amazing. It was just her and an engineer and I, and she hadn’t listened to the tracks I sent. As it turned out, she wanted to do it cold, which is fine and she did a good job.

“But there were a couple spots on ‘Come Back to Me’ where I wanted her to go higher and she wasn’t going for it. She resisted and then kinda got mad and bam! 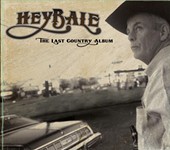 Boy Action
Some of the overlooked testosterone of 2007.