“Excuse me, guys, I’m doing an interview. Just hang out.” Maria Muldaur muffles the cellphone she’s speaking on as she drives from Florida to dates that includes New Orleans, Houston, Denton, and a Sunday night gig in Fredericksburg at the Hill Top Cafe. If all you know of her is 1974 hit “Midnight at the Oasis,” get ready, because Maria Muldaur is on a mission.

Yes, Muldaur has a new album out. Almost unbelievably, it's her 40th in a career that’s seen her go from girl groups in her teens to jug bands and splitting off into almost any musical direction her voice took her, including Top 10 perennial “Midnight at the Oasis.”

And yet, she’s always used music to do more than sing camels to bed or muse about being a waitress in a donut shop. The title of her new disc says it all: First Came Memphis Minnie.

“When I ask audiences, how many have heard of [blues great] Bessie Smith, the majority are clapping. When I ask who’s heard of Memphis Minnie, only a smattering. And she’s so deserving of our attention and appreciation. She wrote over 200 songs, most of which were done by herself with her guitar-playing husbands. Her singing's great and the guitar playing is off the scale!”

Often, tracking musical history requires simply filling in gaps, looking deeper to see how songs and sound were passed along. Dig into nearly every genre, and female innovators appear who don't get remembered as men do. Muldaur has spent most of her career shining light on names that are lesser known but shaped contemporary music, singers such as Victoria Spivey, Sippie Wallace, and Sister Rosetta Tharpe. Muldaur even co-produced Shout, Sisters, Shout, a tribute to Tharpe in 2009, featuring local heroes Angela Strehli and Marcia Ball.

Muldaur’s experience inspired another young woman in the late Sixties, so Bonnie Raitt dueted “Woman Be Wise” with Wallace and produced her Atlantic album in the early Eighties. Muldaur gives Raitt major props for bringing Wallace back into the spotlight and is determined to do the same for Louisiana-born blues beacon Memphis Minnie (1897-1973).

“Minnie deserves our attention and gratitude,” states Muldaur simply. “I have virtually everything she recorded. So much of her repertoire was early country blues, and I knew she’d migrated from the Memphis area to Chicago where she reigned as queen of the scene for many years She was one of the first to plug in the guitar and go electric with ‘Chauffeur Blues.’

“When you hear ‘Good Morning, Little Schoolgirl,’ it came out of the lick and groove of ‘Chauffeur Blues.’

“Every night when we do ‘Chauffeur Blues.’ I hear how her groove is really the precursor to rockabilly, not just rhythm & blues. She's a real pioneer in the development of American music. It’s insane more people don’t know about her!

“When I was 21, [Houston blues singer] Victoria Spivey took me under her wing. She took a liking to me and invited me to be part of the Even Dozen Jug Band project. She was one of the first artists I knew savvy enough to have her own record label.

“She took me to her apartment to look for songs that would be suitable to my voice and she played me a scratchy old 78 of Memphis Minnie singing ‘Tricks Ain’t Walking’ and that was it!

“I became a lifelong fan and devotee.”

For First Came Memphis Minnie, Muldaur gathered a stellar crew of performers including Raitt, Ruthie Foster, Rory Block, and the late Koko Taylor and Phoebe Snow. Each name elicits rapturous response from Muldaur, especially one beloved on the local scene.

“There are a lot of good singers out there, but Ruthie Foster is what I call an anointed singer. She has something in her voice that’s so special and spiritual. She's just amazing.

“I had the amazing privilege and honor and good luck to meet Victoria Spivey and also Sippie Wallace and getting to work with them. I recorded and performed with Sippie too. She wrote quite a few good songs herself!

Muldaur’s Sunday show at the Hill Top Cafe in Fredericksburg connects many of her life’s paths. The Hilltop is owned by guitarist-singer-songwriter Johnny Nicholas, whose own extensive career includes performing with the Texas Sheiks, headed up by Maria’s ex-husband and bandmate Geoff Muldaur. The Hill Top Cafe is as beloved for its eclectic musical guests as its Texas-Louisiana style of cooking.

“I slaved over the liner notes, so I hope this really peaks people’s curiosity into discovering Memphis Minnie. It was so different back when Victoria Spivey had four scratchy 78s. Now, with a click of the mouse, you can download everything Memphis Minnie ever did!” 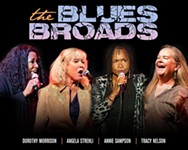