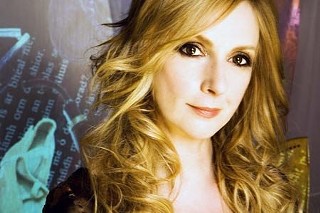 Moya Brennan. If the name looks unfamiliar, think of Mairé Brennan. If that doesn’t ring Irish bells, think of the ethereal voice on the Last of the Mohicans soundtrack. All three are one and the same. Brennan headlines Fiesta Gardens this weekend for the 16th annual Austin Celtic Festival.

Speaking from her hotel room in Denver, Brennan's transitioning between careers, one as vocalist for the Grammy Award-winning Clannad, perhaps Ireland’s most-loved traditional family band, and her own solo career.

On the day we speak, she's performing with Clannad in Colorado, then taking a few days break after the group's first tour in 20 years. After that, she heads to Texas for her first-ever appearance in Austin.

Those who know Clannad may be looking for a different name?

“I wrote my name phonetically,” explains Brennan. “I’d get ‘Mary’ and ‘Marie’ in Europe and ‘Mare’ over here. For years. I’d write my name down correctly at the doctor’s - even in Dublin! - and they’d say, ‘Okay, Mary....’

“I wouldn’t mind if they said it ‘Moira,’ like they’d say in most places in Ireland. But in Donegal, we don’t pronounce our Rs.”

Brennan enunciates the letter for emphasis and chuckles.

“I’ve found old piano certificates with M-o-y-a on it because that’s the way I say it. So I officially changed it. It’s on my passport!

Moya Brennan’s name was her ticket to ride the Celtic Tiger, the late-century Irish renaissance that saw Clannad rise to the challenge of giving traditional Irish music a contemporary light in the Seventies. Their mastery of harmony and blending ancient with modern made for an atmospheric sound that’s influenced acts from Gaelic Storm to Celtic Women.

Brennan's own band includes fiddler Sinead Madden, Cormac de Barra (“the best Irish harper in the world”), and her own daughter Aisling Jarvis for what she calls, “Two harps and lots of vocals.”

That’s particularly appropriate to Brennan’s 6:30pm Saturday slot at the Celtic Festival, known as the “Dimming of the Day” set, when all other stages will be silent except hers. She's back at Fiesta Gardens for a second fest set on Sunday at the Selkie stage, 3:45pm.

A true family band from one of the last Irish-speaking areas of the country, Moya and her brothers Ciaran and Paul started out playing noble pub gigs in their father’s tavern with uncles Pat and Noel Duggan. Younger sister Enya joined before striking out on her own successful solo career.

Given the Irish propensity for song, are Brennan family reunions also musical?

“There’s no stopping us!

“My father had a showband and then a pub, and that’s where I go and do my workshop – at Leo’s Tavern in Donegal. With nine children in the family, there’s always a birthday or anniversary or a christening several times a year for us to get together and my father starts singing and we start harmonizing. We got together for my parents’ 60th anniversary.

“There’s always something to spur on the new generation of Irish musicians, like punk Irish and the Dropkick Murphys. You’ve got bands like Lunasa or Solas or Altan or the Chieftains - there’s a dance type, a ballad type, a Celtic type.

“What’s happening now is the grandchildren, even the youngest. A 16-month-old on my knee, singing in Gaelic. In all my years I’d never seen that. And don’t think for one minute they’re singing Clannad songs. They’ll sing anything from ‘Do Re Mi’ to Katy Perry.