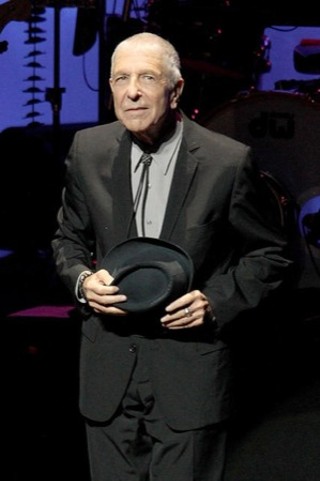 At 78 – seven years older than Dylan, 15 more than Springsteen, and 17 months junior to Willie – Leonard Cohen makes everyone else look like a latter-day Louis Armstrong: iconic clown. At Bass Concert Hall last night, the Canadian crooner channeled more than two dozen songs in an undiminished murmur for 3.5 hours. He duplicates the feat there again tonight.

Employing no visible teleprompter and boasting the knee slides of an Olympian volleyballer, Cohen trotted onstage to a band where four of the six men where also dressed in their employer’s customary coat, tie, and hat, while his three harmony sirens wore pants suits. As with his pair of Long Center concerts in 2009, his supplication began with the first song, “Dance Me to the End of Love.”

That the epic performance started out in much the same manner as his tour of the last four years – his first in decades – proved worrisome at first. Like Springsteen, this Boss of Bosses wants any Leonard Cohen show to be the only one you’ll ever need should you only consummate a single encounter. “The Future,” “Bird on a Wire,” and “Everybody Knows” all in a row after the opener pay off big and upfront.

And yet, counter to conventional wisdom, new material by legacy acts often proves paramount to any concert in that as beat and breathe the new songs, so can they parallel the vigor with which a catalog becomes reinterpreted in concert. Fortunately, the only thing conventional about Leonard Cohen remains that his songs rhyme. When he finally delved into “Darkness” from his fundamental new disc Old Ideas a half-hour into the evening, yesteryear’s nostalgia became today's lifeblood.

Old Ideas rustles autumnal mortality, but it does so with a ruminating growl rather than resignation. By inserting “Darkness,” “Amen,” and the new album’s first song, “Going Home,” Cohen gave his show a contemporary steel backbone as proof that he won’t retire until his knees give.

That left only everything: a trio of Austin greats anchoring the group, guitarist Mitch Watkins, drummer Rafael Gayol, bassist/bandleader Roscoe Beck; the UK beguilement of the Webb Sisters in harmony with Cohen’s longtime collaborator and co-writer Sharon Robinson; and hypnotic, exotic string mastery from Spaniard Javier Mas and Moldovan violinist Alex Bublitchi. Plus reams and reams of grand anthology poetry as the engine.

Sandwiched between “Darkness” and “Amen,” greatest hit “Sisters of Mercy” still wore its Gothic rocker mascara. The first set ran 8:15-9:45pm, and at 10pm sharp, Cohen & company returned for another 75-minute go-round that, while not wholly necessary in its jazz-democratic showcasing of individual talent, nevertheless delivered canon essentials including second set opener “Suzanne,” “I’m Your Man,” and a version of Cohen’s beatific “Hallelujah” that settled the singer into a higher register that no audience has likely experienced in three generations of modern music.

“So Long Marianne” and “First We Take Manhattan” kicking off the half-hour encores, “Famous Blue Raincoat,” “Going Home,” and “Closing Time” following – all topped by a set-list audible in the finale, “Save the Last Dance for Me.” On this Halloween night, Leonard Cohen was frightening all right. It’s even scarier to contemplate music, life, and culture without him. 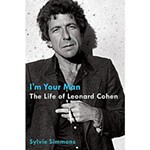