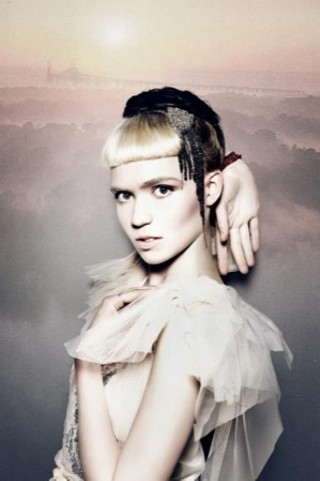 Vancouver electronic artist and production guru Claire Boucher, who performs under the inescapable stage name Grimes on Friday at a sold-out Emo's East, can give you a vocabulary lesson. From neuroscience to affluent non-hipsters, the young performer had a lot to say from her van en route to Atlanta.

Austin Chronicle: How’s the tour treating you so far?

Claire Boucher: Really good, actually. It’s the first tour I’ve done where I’m not in a minivan. I’m in a slightly larger van and it makes a big difference.

AC: Room is necessary when you’re traveling for a long time.

CB: The last tour I did, the van was so cramped everyone had to hold suitcases on their laps. This one's been really good. I’m good friends with the openers, and we’re all in the same car. It’s a good social atmosphere.

AC: Were you friends with your openers before or did you meet them through the tour?

CB: I’ve played with both of them in the past. I thought it would be a good fit. The first band Myths is kind of industrial. It’s a good performance. They use a lot of lights and they’re both girls. I really wanted to bring girls on the tour. They also play with me in Grimes when I perform, so that’s helpful. Elite Gymnastics is a good friend of mine. We were roommates in L.A., actually.

AC: I’ve been following you on Twitter. Lately I keep seeing tweets about K-pop artist PSY’s “Gangnam Style.” What do you think about that song?

CB: [Laughs] I really, really love that song. I think it’s really awesome because he wrote the song, choreographed the dance, and engineered the whole thing. It's different from a lot of K-Pop, because he’s really responsible for everything. He actually works at the label that does G-Dragon’s stuff. He’s one of those behind the scenes guys.

It’s also cool because it’s doing really well in North America. I think that's very interesting culturally. Elite Gymnastics is really into K-Pop so it’s hard to be on tour with him and not talk about it constantly.

AC: You said something about it being a surrealist yuppie anthem. What do you mean by that?

CB: [Laughs] Everyone calls us hipsters, and we decided we’re not really hipsters. We were trying to decide where we fit in the spectrum of sub-genres, and we kind of concluded that we’re surrealist yuppies, because we’re really into mainstream pop music and hi-fi things and catchy things and making things awesome. We’re into working really hard and eating healthy food and exercising, and we’re also really into psychedelic experimentation and being weird. Obviously doing weird things with our music.

A surrealist yuppie is a type of person who's between the hipsters and the mainstream, who's still doing creative things, but isn’t disdainful of mainstream success. Just because something is engineered by a bunch of guys in suits doesn’t make in necessarily bad. We think PSY is the king of the surrealist yuppies because he's really rich and successful. He writes songs for pop stars, but he's also a total weirdo and clearly very intelligent and talented. He’s doing interesting and subversive things in the context of pop music. He’s the most successful surrealist yuppie that we know.

AC: I’ve read you say in interviews that your music is post-Internet. What does that mean?

CB: Basically, I never actually said that about my music. Other people said that. I just used the term post-Internet to describe a neurological phenomenon occurring in young people who grew up with the Internet. I thought it was interesting for someone my age and younger, that at the age of 11, 12, and 13, in that area of neurological development, I was spending a lot of time on the Internet.

Therefore the neural pathways that I used to discover music and media online are going to be developed in a way that anyone older than me could never have developed them. I think it's going to affect the way I conceive things in a biologically different way than anyone older than me who didn’t have the Internet in that part in their life. That is what I meant when I used the term post-Internet: people who grew up in a time after the Internet was prevalent, if that makes sense.

AC: I’m about your age, so I’ll be interested to see how our brains turn out. I’ve seen a lot written about your music being feminine. Your work as a female artist is held as a rarity. What are your thoughts on female soloists and producers in the music industry?

CB: There are always female soloists, but I think the rarity is the production. In the last couple of years there’s been more female artists like Julia Holter that are producing their own music. I think that’s awesome. I think it has more to do with the fact that previously, if you wanted to be a producer, you had to go to school, then get a job at a studio, and dedicate your life to it to have the access and to actually do a good job. I think it was a lot more alienating to women because it was definitely overrun with guys.

Now you can do shit on your laptop. You don’t need a lot of money and it’s way less committal. So it’s easier for women to get into it.

AC: Do you have any new recordings in the works?

CB: I’m trying to record. I’m actually trying to get out of tours right now. I really want to get out a record. I have some stuff, but I don’t ever get to be in a place where I can record vocals, as far as being in a room by myself.

Hopefully I can get started on that soon. After this tour comes to a complete stop, I’m hoping. 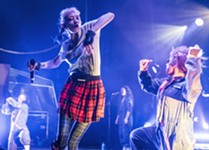 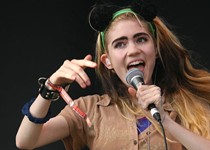