What's Cool and Where It's At 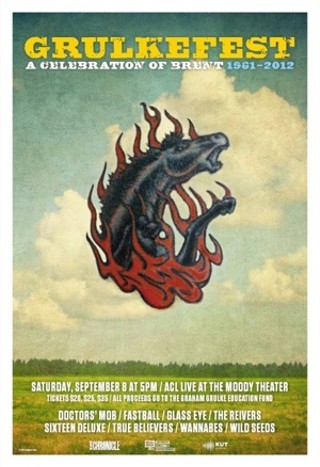 You go to Grulkefest? If you're U18, you probably weren't there to witness Austin's music legends celebrate late SXSW guru Brent Grulke. Personally, I was disappointed more teens weren't there. To me, Grulke helped build the Live Music Capital.

The last time I shook Brent's hand was on the Fourth of July at the Elks Lodge. As one of a few teens at Grulkefest, Alejandro Escovedo's 13-year-old daughter Juanita said she didn't expect to see many teens that night because, "The music was before our time."

That's true. And while neither Juanita nor I had ever seen our dads play in the True Believers, I'll go on record as convinced I won't see a better rock & roll show than that night. (My dad is Jon Dee Graham.)

Grulkefest got me to thinking, "What are the teens of Austin up to and into"? I started polling teens and some of the answers may surprise you. For one thing, teens are reading classics by Truman Capote, Kurt Vonnegut, George Orwell, and Victor Hugo over pop fiction, and that's not assigned reading.

Yet, if it's true that teens are legitimately buying more music than any other age group, what they're into has changed the modern pop culture landscape. New Nielsen studies shows that YouTube's replaced MTV for my generation, and that only 17% of teens are sharing music. While people in their twenties may be file-sharing, teens these days need a teen festival!

Here's some of what I discovered interests my age range:

NOURISHMENT
Sushi. Popular for teens and it doesn't matter where it comes from. Otherwise, Hillside Farmacy was named more than any other eatery besides fast food joint P. Terry's. CINEMA
To no one's surprise, the Alamo Drafthouse - any Alamo Drafthouse – won out over all other movie theaters. All the teens I asked cited the "gourmet food." Runner up: movies at the Paramount because it's "classy." Gourmet and classy, that's what teens want. Who knew, because teens buy more t-shirts at concerts than any other age group.

ICONS
I wanted to know who was considered the icons of our generation and guess what? No one is. Not one teen could think of an icon. As Laurel Elm, an 8th grader at the Khabele School and daughter of Friends of Dean Martinez pedal steel leader Bill Elm noted, "Everywhere you go has people that look and act so vastly different." What's "cool" now is what's "genuine" rather than trying to be like someone famous.

FASHION
Jacob Hope, junior at Austin High and the accomplished bassist of U18 band Bare Feat, says that fashion is individualism. “From there it can go anywhere, as long as one’s style expresses themselves meaningfully, and truthfully. The overall definition of what is cool is changing. It's cool to be who you are. In my eyes, it's about those who have the awareness, and the determination to do what they love and use their passion as a tool to not only to express or observe the world around us, but to help it as well."

AUSTIN
One thing that stood out among all the teens I talked to is that being a teen in Austin is where it's at. Jacob Hope noted, "Everywhere is my favorite place to see music and it's great to have grown up in this amazing, weird city of ours - Austin, Texas!" Juanita Escovedo said, "You can just walk down a street and see a sidewalk band."

Favorite place for teens to see a live show in Austin: ACL Live at the Moody Theater because as Juanita points out, "There's not a bad seat in the house."

What's on their iPods?