A Son of the Fathers of Texas

Steve Mendell's life, work, and music filled in the gaps 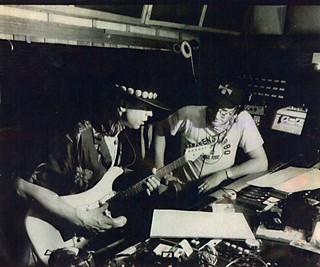 These notes come with more and more frequency these days, each a bittersweet reminder of the transience of life. “My cousin Steve Mendell passed away August 19 at age 65, after a years-long battle with cancer,” wrote MJ Mendell, a stalwart of Asleep at the Wheel’s home office. “If there's some way you can run even a small blurb....”

Steve Mendell passed very quietly off this earth, while leaving a legacy of loud, proud music. Some of his career highlights include serving as Texas Music Commissioner, engineering Stevie Ray Vaughan’s Live Alive, and most of Townes Van Zandt's records.

He also produced Lonnie Mack and was a regular fixture at Arlyn and Pedernales studios. Mendell played bass on recordings by James Brown and Tracy Nelson, and lived and gigged quietly in the Hill Country for the last 20 or so years.

Steve Mendell was particularly proud of a special project called The Fathers of Texas, an original collection of songs and narratives tracing the roots of the state back to its early days of settlement. On San Jacinto Day in 1997, the Texas Legislature adopted a resolution naming the Fathers of Texas as the Texas State Historical Soundtrack.

On Tuesday, Sept. 25, from 5-9pm, Ben Beckendorf hosts a memorial show at the venerable Luckenbach Dance Hall, with Mendell’s six children and family expected to join in tribute. Friends and the public are invited to share the evening, an appropriate farewell to the man Texas Music Office’s Casey Monahan said, “Made Texas sound a whole lot better.

“The recording community and the many musicians who he worked with will miss his quiet humor, his attention to detail, and his soul,” added Monahan.

I can’t be there because I'm teaching a UT Informal Class that night, but while musing on Austin music history was fun, the experience of creating a coherent syllabus made one thing clear: for every Stevie Ray Vaughan, there are 10 Steve Mendells.

The Stevies made it rock, but the Steves make it roll.