He Is My Story: The Sanctified Soul of Arizona Dranes In a recent interview on NPR, local writer Michael Corcoran commented that seminal gospel singer Arizona Dranes is “completely obscure, for really no good reason.” Unfortunately, that’s the story of far too many artists - musicians and otherwise. If Sister Rosetta Tharpe can be marginalized, no surprise Arizona Dranes is so overlooked.

For writers, there’s a deep joy in the discovery of forgotten talent. I was fortunate recently to barely touch on the life of Shirley Ratisseau, still living yet all but forgotten to time. Corcoran did something similar this spring for the Chronicle with his cover story on rockabilly veteran Ray Campi.

Part of the pleasure of discovery has to do with a love of genealogy and a keen interest in history, which led to Corcoran's appreciation for how churches kept family records and how ethnic groups that migrated into Texas kept traditions alive through music and social activities. The older I get, the more I too take a great deal of personal comfort in this kind of knowledge.

When Corcoran recently revealed that his project for the Tompkins Square Label, He Is My Story: The Sanctified Soul of Arizona Dranes, isn't so much a music biography as a well-designed CD package with accompanying notes and 16 remastered tracks, I was both jealous and thrilled. Jealous because... well, because it’s a damn fine discovery. And thrilled because Dranes is a fascinating and crucial linchpin in the development of gospel music.

Casual readers of Corcoran’s decades of work here in Austin may not grasp the depth of his love and devotion to gospel music. Perhaps it seems like an odd affinity for someone who grew up Irish Catholic in Hawaii, but then right there is a clue. Hawaii itself boasts a strange juxtaposition of music: native beats layered with primal chanting of ancient hula (hula kahiko) contrast with the perky ukulele that often accompanies modern hula (hula auana).

And yet Corcoran grew up a rock & roll lover, and along the way, began examining the cornerstones and milestones that marked it. That’s how he discovered blind Pentecostal singer and piano player Arizona Dranes, whose “Christian barrelhouse” style paved the way for Little Richard and Jerry Lee Lewis, among others.

This Thursday, Sept. 6, at 5pm, Corcoran signs copies of He Is My Story at the Texas Music Museum on 1009 East 11th. I’m leading the discussion with him on his subject as well as on his own experiences in discovering and researching her life and music, including her years in Austin as a student at Austin's Institute for Deaf, Dumb, and Blind Colored Youths. 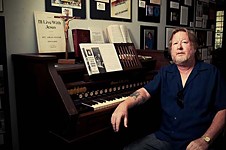