How to choose a college 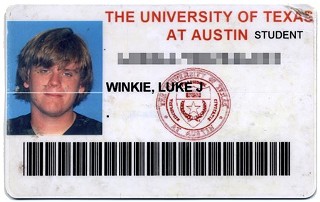 Did you see our vintage staff ID roll on the homepage this week?

The University of Texas was the only school I applied to. To my parents it made perfect sense. It had a strong journalism program, reasonable tuition, and unlike every school in California, only required a scant 30 credits to be considered for transfer.

I rounded out my high school career with a modest 2.6 GPA, and had just finished doing a year's time in a microscopic community college. The boundless, nondescript expanse of San Diego County was my background. I spent my nights sweeping up a pizza joint or tucked away in a Denny’s booth with the only friend I had who was still in earshot. Safe to say, I was ready for a change. When I got accepted to UT in July 2010, it felt like my whole world was folding over.

Austin's a fairytale destination, especially if you grew up with a certain disposition. I read about Emo’s, South by Southwest, and the Johnny Cash show. I remember using Google Maps to track how far a walk would be from the center of campus to the noisy end of Red River. I read Yelp reviews of Kerbey Lane and made up my order long before I’d ever step foot in the city.

My California brethren met me with quizzical looks when I told them I was going away to school in Texas. I modified it with, “Well, it’s in Austin.” The first night I stayed in Austin was the same day I arrived. This way my venture, this was my idea. As a fresh 19-year-old, I was banking on this city to make all my dreams come true.

You see, students like me didn’t choose the University of Texas. They chose Austin. They chose rock & roll.

The tradition of music in this town is responsible for new immigrants every day. I wanted to go to a school where I could go to a lot of shows. That’s it. That was my criteria. I think that’s a pretty noble goal if you’re young enough. There’s a shortlist of cities in America that can look like a utopia from afar, but Austin is the only town that also offered cheap food and seemingly monthly music festivals.

I unpacked my belongings into a tiny, prison-like box on the 21st floor of the Castilian, probably the ugliest building in the entire city. I had no friends, no familiarity, and no contacts; I would have to earn back everything I left behind in Southern California. I wasn’t sure where to start, so I did the only thing that made sense and started going to a ton of shows.

I don’t know how many shows I’ve been to since I moved here. Part of me wishes I kept count. I made my way downtown almost four nights a week in my first year. I was by myself, and too young to drink. I went to every show that even caught a modicum of my interest, partly for work, but mostly because I needed to feel in motion.

When you’re freshly moved to a city like Austin, the stimulation of being out and engaged helps justify any loneliness you might’ve accumulated along the way. I was trying to cash in on the Austin way of life through brute force. The Mohawk, Emo’s, Red 7, these places kept me sane.

Whenever I missed my friends, or my family, or that Denny’s, I took solace in knowing that there was always something worth watching five minutes away from my house. It was the one consistent streak in a predictably schizophrenic introduction to a new environment. I wouldn’t have survived without the music.

It’s now been exactly two years since I moved here. Things are not how they started. I have dozens of wonderful friends, an amazing girlfriend, a detailed mental-map, and an apartment with more than one room. Those early memories of this city feel impossibly distant. Austin has morphed from some fantastical fantasyland to my very real, and very compelling home.

I spent a lovely time this summer back in San Diego with my family, but I was always itching to get back home, to get back to the music. My life as a California transfer student in Austin has sprouted out of records, bands, and long conversations. It feels natural, and I couldn’t be happier.

READ MORE
More Back to School Campus Hacks: Huston-Tillotson
Learn to navigate this historic Eastside university with these hacks