I lost my wallet in Poland last October – the night we returned to Krakow from Auschwitz. That put it in perspective: I’d only lost a wallet. I lost the replacement Wednesday night in San Antonio – to Iron Maiden at the AT&T Center. All I’d been thinking about this week was Brent Grulke. He put it in perspective: All I’d lost was another @#$%* wallet.

For 18 years I worked with the South by Southwest Music Festival head, who died unexpectedly Monday at the age 51. He was a good man, a music purist. As beleaguered as Brent became every March, I could always count on him for the cause, and the cause never wavered: represent Austin.

Getting a phone call from Louis Black on Monday about Brent Grulke was terrible. Those are dread calls. I got them concerning Doug Sahm and Clifford Antone – Don Walser. Sims Ellison. After each one, I wonder who’s next.

Ask not for whom the bell tolls....

I had no intention of going to Iron Maiden until the band’s camp offered me tickets. The last time I drove a Japanese beater to San Antonio for a show was in 1998 when my Datsun took its final breath just north of San Marcos. Deadline Wednesday at the paper – an issue clouded by Brent’s death – plus a now ancient Honda seemingly ruled out a concert hop, but when Sandy Carson texted “Hell Yes!!!” at my last-minute inquiry, the metal gods gave stern command: Don’t turn down Maiden tickets.

Sandy and I hadn’t rendezvoused since taking Billy Joe Shaver for a dip in Barton Springs last month. Screening Pentagram doc Last Days Here hadn’t happened, and our paths diverged in clubland, but he’d never caught the UK metal brigade and my first time four years ago at the bygone Verizon Wireless Amphitheatre dealt a wind-buffeted, first-night-of-the-tour disappointment despite a proper dusting off of “The Clairvoyant.” Such was the anti-climax for this former suburban teen who bought The Number of the Beast when it came out in 1982.

Iron Maiden’s third song Wednesday – after openers “Moonchild” and “Can I Play With Madness,” both from the show’s backbone (or rather the decapitated skeleton of band mascot Eddie), 1988’s Seventh Son of a Seventh Son – that’s when Brent Grulke chuckled from somewhere deep inside my grieving psyche. Caged Beast “The Prisoner” begins with dialogue from Brit cult staple The Prisoner: “I am not a number! I’m a free man!” I hadn’t heard it in years – nor the song – so the former exhorted a laugh and the latter proved a metal epidural.

For the first time in days, my body unclenched.

Can’t say where Brent Grulke stood on Iron Maiden, but he appreciated humor in music, and inside the roaring AT&T Center, I imagined him grinning at the evening’s chosen method against the madness. “The Prisoner” had shaken something loose.

After “The Prisoner” and then “Aces High” twin “Two Minutes to Midnight,” the English sextet executed a five-song, 20-minute run that left San Antonio breathless: galloping war horse “The Trooper,” into Rosemary’s Baby gone Hammer film cue “The Number of the Beast,” followed by “Phantom of the Opera,” scalping breakthrough “Run to the Hills,” and finally Somewhere in Time traveler “Wasted Years.” Three guitarists stampeded by metal's best bass-playing songsmith after Thin Lizzy’s Phil Lynott – one Stephen Percy Harris – plus a Promethean beat keeper, and jet pilot frontman torched one hit after another like heavy metal’s Rolling Stones.

Hypnotist title track “Seventh Son of a Seventh Son” stretched 10 minutes of pipe organ atmospherics and fog – all four string benders head down in the swirling soup – but in LP mate “The Clairvoyant” next, the events of the week coalesced into a chorus that continues pooling in my decapitated Eddie skull:

Thanks for the plus one, Brent. Save us a seat. 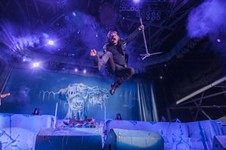